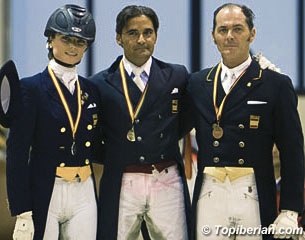 Taking out round one, the Grand Prix, with 71.936% Jose Antonio Garcia Mena and his grey PRE Norte backed that up with a 72.083% winning Special. While the pair dropped to second in the kur, they finished overall in the G golden spot ahead of Spanish team mates Carmen and Jose.

"My result at the Spanish Championship, to win the gold medal, has made me so happy," said Jose. "Norte was really good for the entire championship."

Feeling that he was a little conservative with Norte on the first Grand Prix day, Jose thought his horse was truly in top form and knew that he step up a notch in the Special. "I asked him for more expression and he just kept giving me more and more." 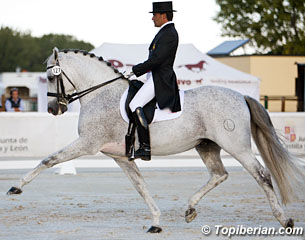 However as he was last to go on in the Kur, Garcia Mena had to deal with the fact that after a full day of rain, the arena surface was not a 100%. In spite of the conditions, Norte still performed really well, leaving his rider 100% happy and proud of his horse. "My only aim leading up to the championship was to make sure that Norte was fit for this competion and it was important for me that he was feeling good, that he was happy and that he could give me all he could. I wanted him to be 200% with me, particularly after the big few months he has had recently. Last month we had the Europeans, so a long trip and hard work and he didn't get to have holidays when we came back because we had to prepare for this championship! Luckily he arrived at the Spanish Nationals feeling great. Thank God!"

The 13-year old Norte a PRE stallion bred by Enrique Lovera of Cordoba. Jose says the Lovera family has a long history in Spanish husbandry and aim to purposely breed for sport and have really good horses. "Norte is a gentleman, everyday he gives me his best and he has such a big big heart. He is calm, quiet and does not get disturbed by the things that happen around him. He is a really fantastic horse!"

The 2013 Spanish Grand Prix Championship were historical because no less than 32 Grand Prix horses were entered, a record.  "You can always see some really good horses and you don't know, or you have bad luck, or who knows, you know horses can always surprise you." In the absence of a national coach for the Spanish Senior dressage team, Jose spends most of the year training alone but luckily has some very wise dressage friends. "Since Jan left us, we are now in a new period of transition and we will see what happens in the future," Garcia Mena explained. "For now, I get great help on my trips to Germany to visit Isabell Werth as we are good friends and just looking at her and how she trains can help me learn a lot. Also here in Spain I have Rafael Soto, a super trainer and good friend too. Of course there is also Mr Bemelmans, with whom I have some new and very nice plans!"

Set for some well deserved holiday, Norte will also go to draw some fresh and frozen semen for next year and then after this little break he will start working again for the next season. "In addition to Norte there are around 15 horses in the stables from 4-year olds to Grand Prix level," said Jose. "My other “top” horses are Batuta, a 7-year old Lusitano mare near to Grand Prix and the 5-year old Dragao Figueiras, both from Portuguese breeder, Antonio Simoes. I also have two other very interesting European horses from Baselga, a Spanish breeder, that were bred here, in Spain."

Jose will now compete with three of these in the 2013 Spanish Young Horse Championship this weekend and then return to the stable to continue his dressage life. 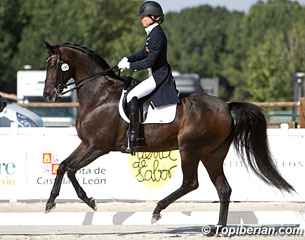 Last year's Spanish Grand Prix champion Carmen Naesgaard became the winner of the Kur test with 75.725%. Aboard the Hanoverian bred Ricardo B (by Rosentau) she also placed third in the Grand Prix and second in the Special, taking home the Spanish silver medal in style.

"Ricardo felt very well, at first a little uneasy because everything was so new to him," Carmen told Eurodressage.  "As we began to work he gradually calmed down and I could feel him concentrating on the work and on me."

Carmen was very surprised by the experienced Ricardo who behaved well and felt confident in his desire to work in the test arena. Carmen got the 10-year old Ricardo froy her parents when he was five. She knows him for his endearing character, which she believes he inherited from the compassion of his breeders. "He was raised in an environment full of love and trust by his breeder Elke Brenneke," said Naesgaard. "Ricardo is a very sociable and peaceful horse with the need to approach any living being with curiosity." 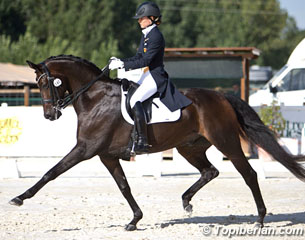 Not expecting to take out the silver, Carmen says this was not for lack of confidence in her horse but due to an overall lack of experience in test conditions. "This was his first-ever Grand Prix Special and Grand Prix kür so I was very happy," she beamed.

Training with Mijas Costa in Malaga, Spain, Carmen plans to continue working to improve and gain experience both at home and in competitions. "Above all we want to enjoy our dressage training."

Posting a score of69.723% for a second in the Grand Prix, Jose Maria Sanchez Cobos and the PRE bred Fogonero IX earned a third in the Special and a fourth in the kur and grabbed the Bronze medal.

"Fogonero IX is a very sensitive and hot horse with a strong character and spectacular airs," said Jose. "I love to ride this horse but he is not easy." 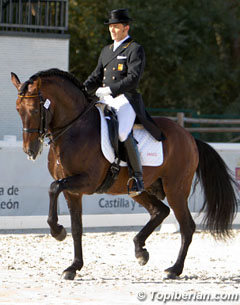 The 15-year old was born and raised inat the Royal School of Equestrian Art in Jerez. Jose enjoyed taking this "very classy" stallion to such a well-run and enjoyable event. "The Championship has been great, with good organization and facilities," he commented

With a dream to be part of the Spanish National team and go to the Normandy World Equestrian Games next year, Jose trains everyday at the Royal School and benefits from the daily coaching of his fellow Art Equestrians. "I also train in Seville with my friend, Jose Monrové and I have other horses currently in work, including a KWPN black mare by Metall, which I like a lot and hope to compete at a high level in the coming years."