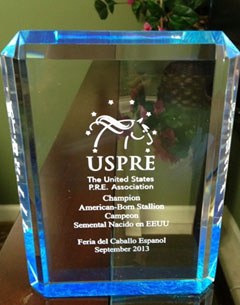 This past summer, the Breeders Executive Committee of USPRE announced the creation of a new Breeders' Award: the Born in America Award for US-bred horses at ANCCE competitions. As a result, four very special awards were presented this past Sunday by USPRE representative Ricardo Nigaglioni for the first time at Feria del Caballo Español.

These awards are designed to celebrate the achievements of American breeders whose passion and dedication to our breed are producing PRE horses of distinction. They are presented to the American bred horses with the highest morphology scores, except in the case where the judge (s) have selected a different American born morphology Champion, in which case the judge(s) opinion supersedes the high score. The USPRE Born in America Award was presented to the following horses and breeders: click here to view this years winners.

Check out the award winners here.