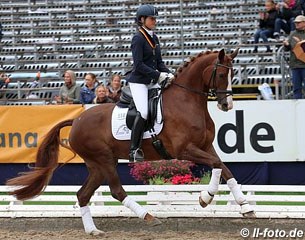 Earning her claim to fame, Stefanie Wolf and For Comtess Royal NG slipped passed our eyes but grabbed the attention of the judges when she tied for bronze in the 5-year old Dressage Horse division at the 2013 Bundeschampionate in Warendorf on 4 - 9 September 2013.

Scoring an 8.5 total to level with Ann-Kristin Dornbracht and Soiree de Saumur, Stefanie has worked with the 5-year old chestnut Westfalian  mare For Comtess Royal NG (by Florenciano x Show Star) through the whole season and feels it is fantastic to be rewarded for their efforts.

"It's great to win bronze, particularly as there were 61 horses competing," Stefanie told Eurodressage. "During the Bundeschampionat I felt that For Comtess was in top form and felt her, everyday, highly motivated and in the tests highly concentrated."

Qualifying 4 horses to compete in the 2013 Bundeschampionate, Stefanie made the final round with two of the four. With Stanford (by Sir Donnerhall I x Diamond Hit) she earned a fourth place in the class for 4-year old stallions.   "In 2012 I already won 2 medals in the Bundeschampionate, so I really feel that the competition has been very rewarding experience for me," she explained.

Her bronze winner mare, bred by Herbert Laumann in Greven, is now owned by the Next Generation Dressurpferde der Zukunft GmbH. Though only 5 years of age the mare has already been very successful.  "She belonged to the top mares of the Elite Mare Show in 2011, won the Westfalian Regional Championship and the Westfalenwappen in 2011 and was in the finals of the Bundeschampionat in 2011 and 2012 with her former rider Silke Ottenjahn," Wolf stated. 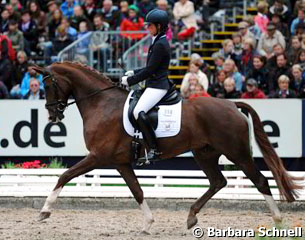 Trained by Johann Hinnemann at the Krüsterhof in Voerde for almost 6 years, Wolf got the ride on mare through her highly successful dressage trainer who spotted her and recommended her to one of his clients.  "The client, Next Generation, who have several horses in training in our stable, bought the mare at the beginning of April 2013 and in May we won our first Dressage Horse L test," she said.