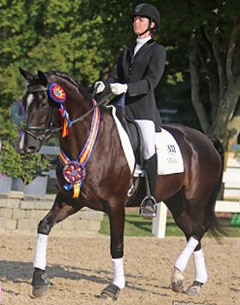 The 4-year old Rebellienne HVH, the 5-year old Fashion Designer OLD and the 6-year old Vitalis became the winners of the 2013 U.S. Young Dressage Horse Championships  at the Lamplight Equestrian Center in Wayne ILL on 23 - 25 August 2013. All competitors rode in front of the star-studded panel of Lilo Fore, Anne Gribbons and Sandy Osborne.

Saturday came to a close with 13 of the best horses from the 2009 foal crop completing the USEF Dressage Test for Four-Year-Old Horses for a second time to earn the remaining 60% of their championship score.

Brandi Benedict (Lovettsville, VA) and High Valley Hanoverians’ Rebellienne HVH (Rotspon x EM Whitney/Welser) turned heads throughout the week to be named the Four-Year-Old Champion on a score of 8.760. The Hanoverian mare was the winner of Thursday’s Qualifying Class, in a performance made all the more impressive because they competed in the deluge of rain. He returned Saturday and was a little tired but nonetheless persevered to finish third in the Championship Class on a score of 8.720.

“Thursday went really well, it was our first test together, it was interesting in the pouring rain,” joked Benedict. “Today she was a lit bit more tired but still really tried.”

Rebellienne HVH and Benedict have only been partnered together for two weeks but nonetheless were able to earn top marks. On Saturday, the mare’s gaits were regarded highly scoring 8.8, 9.5, and 7.5 for the trot, walk, and canter respectively. Additionally, they received 9.0 for submission and 8.8 on general impression.

Benedict credits the mare’s great performance this week to her early training and breeding.

“All of her training really came through, as did her breeding. I really have to thank High Valley Hanoverians for giving me this opportunity.” 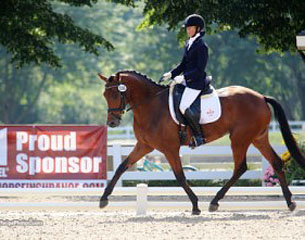 Earning Reserve Champion honors was the KWPN gelding Encore (Jazz x Aloha SE/Sir Sinclair) with owner/rider Amy Miller on a score of 8.736.The pair were the second place finishers in both the Qualifying and Championship Class.

In an interesting twist, they tied with Benedict and Rebellienne HVH in Saturday’s class on a score of 8.720. Generally, when there is a tie it is broken by breeding nationality, but as both were U.S. Bred the tie remained in place. It was then turned to the judges to choose the winner, and it was determined that Encore would earn the red ribbon.

For his performance on Saturday, the gelding received 8.5, 8.5, and 8.8 for their trot, walk, and canter gaits, as well as 9.0 for submission and 8.8 for general impression.

“I got him at the end of his two-year-old year,” said Miller. “On Thursday, he scared himself a bit with the tractors in the other ring but got it back together. Today he tried so hard and you can’t ask for more than that.”

Anna Marek (Williston, FL) and AJ Stapleton’s Elain (Sir Oldenburg x Barliane/Santano) collected third-place honors on an overall score of 8.700. The KWPN gelding was the winner of the Championship class on a score of 8.780. They received scores of 8.8, 8.5, and 8.8 for the trot, walk and canter, in addition to 9.0 for submission and 8.8 for general impression. 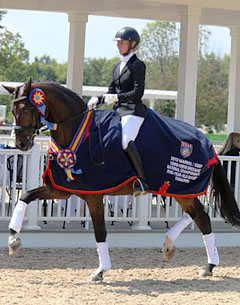 Nadine Burberl (White House Station, NJ) entered the Championship Arena with Michael Davis’ Fashion Designer O.L.D. (Faustinus x Forst-Design/De Niro) knowing that with a strong performance she could claim her first National Title. She did just that scoring 9.060 in the Championship Class to finish on an overall total of 9.012.

Burberl, who is originally from Germany but has been based with Cesar Parra for four years, was impressed with the Oldenburg gelding on both Thursday and Saturday.

“Both rides went amazing; on Thursday we had some work to do and worked on that on Friday,” said Burberl who believes that training a young horse takes time and patience. “It’s not just three weeks; it’s done throughout the year.”

Fashion Designer O.L.D. impressed the judging panel on Saturday with his fabulous gaits including his trot for which he was rewarded a 10, the gelding also received 9.0 for the walk and 8.5 for his canter. Additionally, he received high marks for submission and general impression; 8.5 and 9.3, respectively.

“It’s just amazing; I have goose-bumps every circle, every canter stride,” said Burberl. “and the trot is just amazing.” 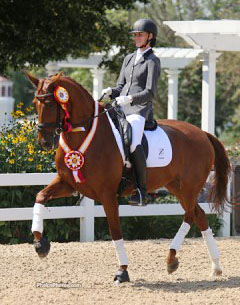 Thursday’s winner DG Dancing Queen (Jazz x Princes Lincom/Junior) and Ashlyn De Groot (Hanford, GA) earned Reserve Champion honors after scoring 8.860 in the FEI Five-Year-Old Final Test, they finished on a championship score of 8.916. DG Bar Ranch’s KWPN mare was awarded 9.2, 9.0, and 8.6 for the trot, walk and canter. A mistake in the simple change kept the talented mare from earning higher submission and general impression score, they were awarded 8.5 and 9.0 respectively.

“I’m just so excited; we all have our days. She’s just such a great horse and fun to work with,” said the 19-year-old De Groot who is a longtime participant in the Young Horse Program. “They (young horses) are fun to work with; you see them learning and progressing, it’s so rewarding.”

Burberl also collected third place honors with another Davis’ ride, Fiderhit O.L.D. (Fidertanz x Fleur/Sandro Hit), on a championship score of 8.620. The Oldenburg mare received 9.5, 9.0 and 8.2 for the trot, walk and canter. She also was awarded 7.8 for submission and 9.0 for general impression, to finish on a score of 8.700 in Saturday’s test. 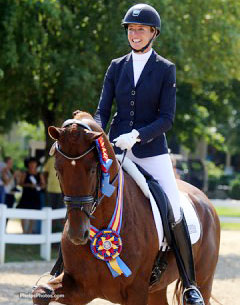 The Six-Year-Old competition kicked-off on Sunday as 12 up-and-coming horses showcased their talents in the FEI Six-Year-Old Final Test to earn the remaining 60% of their overall score.

Skagen Holdings’ Vitalis (Vivaldi x Tolivia/Donnerschwee) continued to impress to win the Six-Year-Old Championship by a healthy margin. Ridden by Charlotte Jorst (Reno, NV), the KWPN demonstrated athletic, expressive gaits; including the trot for which he was awarded a perfect 10, he also received a 7.5 for the walk and a nearly perfect 9.8 for the canter. Additionally, the judging panel rated his submission and general impression highly, giving 9.0 and 9.3, respectively.

The stallion received 9.120 on Saturday and finished on an overall score of 9.152.

“I’ve just loved it here throughout the week,” said Jorst. “Today I was focusing on me; I had a great ride on Friday, so I didn’t want to change a lot.”

Jorst and Vitalis represented the U.S. two weeks ago in Verden, Germany at the FEI World Breeding Championships for Dressage Young Horses. Jorst believes that the Young Horse competitions and championships are very important to helping the development of the sport.

“I think you put a stick in the ground and you train forward from that, you know where to focus and what to do,” said Jorst. “The exposure is really important.” 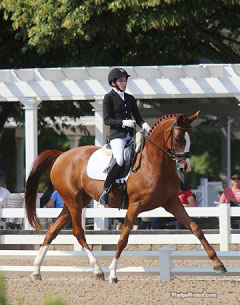 Earning Reserve Champion honors were Jane Karol (Concord, MA) and her own Sunshine Tour (Sir Donnerhall  x History/Alabaster) on a championship total of 8.028. The Oldenburg mare was regarded highly for her trot and canter earning 9.5 and 8.3, respectively. However, their overall score was held back after being assessed a 6.6 for the walk. They earned a score of 8.180 on Saturday after receiving 8.2 and 8.3 for submission and general impression.

“I felt I wanted to go for it, but not too much,” said Karol and felt that Sunshine Tour improved on Sunday. “I felt like I had more suppleness and she was more through the back.”

Caliente DG (Oo Seven x Satina/Contango) earned third place and was the Highest Place U.S. Bred award winner on an overall score of 7.940. Ridden by Craig Stanley (Madera, CA) Brenda Linman’s KWPN mare received a score of 8.180 on Sunday. She received 7.8, 7.6, and 8.7 for the trot, walk and, canter as well as 8.3 and 8.5 for submission and general impression.

Caliente DG is a credit not only to her breeders, owners and training she has received but also the U.S. Young Horse Dressage Program, having participated in the Four, Five, and Six-Year-Old Championships.