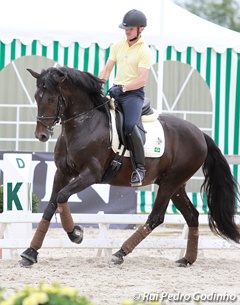 The Brazilian Equestrian Federation has selected its first Brazilian born horse ever to compete at the World Championships for Young Dressage Horses in Verden, Germany, next week. Brazilian Rodolpho Riskalla has been nominated with the Lusitano Dinoco do Drosa.

The 6-year old Dinoco do Drosa (by Xirineus da Paixão out of Splenda do Retiro (by Dardo II)) is bred and owned by Roberto Ferreira Camargo Pedrosa.

Riskalla has been training the bay stallion since December 2012 after discovering the horse at a few teaching days in Brazil in October. The pair is now based at Marina Caplain Saint André's Haras de Champcueil in France, where they have been training and competing this year.