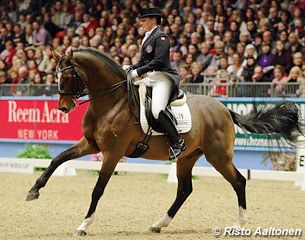 Norwegian Grand Prix rider Lillan Jebsen has received a wild card to compete at the 2013 World Cup Finals in Gothenburg, Sweden, on 24 - 28 April 2013.  The FEI preferred Jebsen for the first vacant spot that has opened up to Canadian Pia Fortmuller who is much higher placed on the World Cup Ranking.

Jebsen is filling up the empty spot of the South American/Asian League as no rider from those continents is travelling to Sweden to compete in the Finals. Surprisingly Jebsen was chosen over Canadian Pia Fortmuller, who would have been next in line on the Western European League Ranking for an invitation to the World Cup Finals. Fortmuller could have been the third Canadian competing at the Finals with each country allowed to have a maximum of three riders represented.

German based Fortmuller is placed 14th on the WEL Ranking with 33 points, whereas Jebsen is ranked only 25th with 18 points. The next ranked rider after Fortmuller would be Silvia Rizzo from Italy (18th - 23 pts), but the Italian Equestrian Federation was totally oblivious to the fact that a wild card had to be requested in order to be considered for an "extra starting" place. Austrians Karin Kosak (20th - 22 pts) and Stefan Peter (21st - 20 pts) follow Rizzo on the WEL Ranking.

FEI Dressage Director, Norwegian Trond Asmyr, explained why Norwegian Jebsen and not Canadian Fortmuller got the wild card. "Canada already has two confirmed participants in the Final, while Norway had none and the wild card has been given to Lillann Jebsen based on the wish to have more nationalities represented at the Final," Asmyr told Eurodressage. "One of the intentions of having wild cards is to be able to increase global representation." 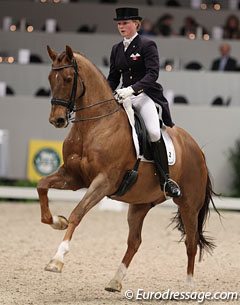 Asmyr added that "only Canada and Norway have requested wild cards, in addition to those who have already received them." Riders can only apply for a wild card after the last qualifier in their League; for the Western European League riders that was right after the 2013 CDI-W 's Hertogenbosch.

"I have applied for the wild card," Fortmuller told Eurodressage. "That was the first thing I did after the last qualifier in s' Hertogenbosch. Lillian Jensen some how slipped in the spot before me! But I am the reserve after her, so I'm staying positive and am still really hoping that there is a chance that I can go to Sweden. I've even had a whole new freestyle made. I have learned not to get worked up about the things out of my control. All I can do is focus on my training and if we do get to go to Sweden, then Orion and I will be ready."