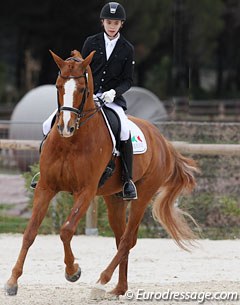 Having mounted his brand new horse just two weeks prior to the 2013 CDI Vidauban, Germany's Lucas Alecco Roy proved that when a horse and rider match up, you have a winning combination! The 15-year old swept the junior rider classes on week two at the Spring Tour in Vidauban.

"I had my first ride ever on Wisdom just two weeks before Vidauban and this was my first international tournament," Lucas told Eurodressage. "In the first test on Thursday 28 February I came 5th with Wisdom and then 4th in the Freestyle on the following Saturday."

However, it was in the second week that Lucas and Wisdom had their "breakthrough" winning both the Individual and Freestyle test with  66.789 and 70.775%. "The whole show was great. For my first international tournament I am very happy and also to have the opportunity to ride some of Bernadette Brune‘s fantastic horses was just incredible," he explained.

Vidauban show host Bernadette Brune sold her 14-year old Hanoverian bred stallion Wisdom (by Weltmeyer x Matcho AA x Wummestern) to Lucas and was ecstatic about the young boy's quick rise to success. "Lucas is a great guy with a great talent," said Bernadette. "He is a very serious worker and always nice and helpful. He rode the horse only one week before the show for a photo session and then we decided he should do the show. And between both shows the parents decided to buy the horse for him. It's a fairytale." With the highlight being the prize giving for the Freestyle, Lucas was moved when the national anthem was played over the arena. "That was a very special moment, as you know you have earned it together with your horse," he confessed.

Difficult to get to know a horse in two weeks, Lucas says his biggest challenge was his own nervousness. He cannot remember ever being so worked up. "This was my first Freestyle in Vidauban and I was never so nervous in my life. But once the music started, Wisdom and I were in the zone and it was all about enjoying the moment. However, whenever I am nervous my horse picks it up and reacts to this accordingly and as stallions are, Wisdom can be rather lazy!"

A Hanovarian licensed stallion Wisdom is the wiser of the pair and has gained a lot of international experience and success with Stephanie Colier. "He is a still a stallion though and has a very sensitive character," said Lucas.

His first word being 'horse', Lucas believes that was pretty much where his dressage dream began and has been lucky to score the ride on some great horses over the years.  "I always had a passion for horses. I only really started to ride at age 11 when I got my first pony. He taught me a lot but also taught me respect," he said. "We then sold him after almost 2 years as it did not work out as well as hoped. Soon after I got a horse called Dr. Dulittle. In one season I went from Preliminary to Elementary with him. I learned the love of dressage with this horse. " 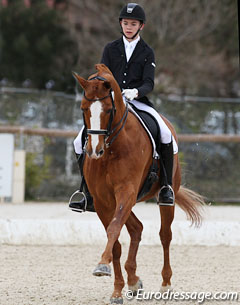 Initially trained in Germany by Erich Geier, Lucas always got the support from his coach. However, his family has now moved to Monaco and Lucas has moved on with two new horses, Wisdom and the Hanoverian gelding Wunschträumer, which he found through Hartwig Burfeind one year ago.  "Both of my horses are chestnut and both are beautiful horses who are great fun to ride," he stated.

Training at the Domaine Equestre in Vidauban with Bernadette Brune, Lucas has already learnt so much in the 3 months he has been there. "Our training is currently focused on the movements, half passes, my position, and my self confidence," he said.

Only just beginning his career in Vidauban, Lucas is just hoping for the best in his competitive future.  "My confidence on the horse always is a problem but it gets better by the day and each competition. I hope now to compete at the CDI Saumur and Preis der Besten to get into the German team!"