Hoffmann to Replace Telde as Guest Judge Rider in Herning 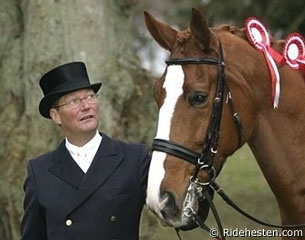 After competing at the 2013 CDI Bremen last weekend, Minna Telde had to call in sick and can not appear in Herning for the job.

"We at Danish warmblood believe that we have lifted the Young Horse Championships to a new level," said DVB managing director Casper Cassøe about the swift substition of Telde by Hoffmann.

"It's my job and I'm very happy to do it," Hoffmann commented about being hired as test rider. Hasse is one of Telde's former trainers.

Hoffmann is highly respected in Denmark as a good communicator. One of Hasse's strengths is that he is keen to communicate and bring his message on. He masters it with precision and empathy and often spices it all with a warm sense of humour.