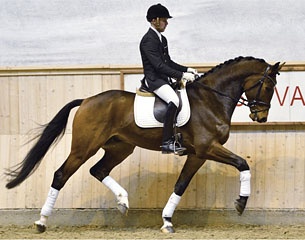 Head of the Auction Committee, Ulrik Kristensen, is very pleased with the collection of young horses for the Spring Auction held at the 2013 Danish Warmblood Stallion Licensing in Herning, Denmark, on 6 - 10 March 2013. In proportion to the small amount of colts entered for the pre-selections he considers that the Spring Auction has been well favoured.

We are dealing with a collection of 18 colts of which 11 are bred for dressage and the remaining 7 for jumping. Regardless of the judges verdict over these stallion prospects they can be considered as a group of promising sport horses.

Interested parties have the possibility to view the auction lot prior to the auction. The 3-year-old colts will be shown in lunging reins, and word has it that many of them will be presented under rider during the auction. This, undoubtedly, provides the potential buyers with the opportunity to judge how the colts show themselves under saddle.

"I find that we have very interesting horses bred for dressage as well as jumping. In addition we are dealing with owners who are prepared to sell their horses, which is an essential success factor for a good auction," says Ulrik Kristensen.

He is enthused by the collection of 4-6-year-old riding horses, among which is the regional young horse jumping champion “Dior” by Carmargue with the Acord II son As di Villagana as dam sire. At the suitability test in Aalborg “Dior” achieved 9.5 for canter and technique as well as capacity.

Mare of the Year and a licensed 4-year-old stallion 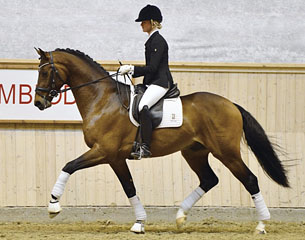 Among the riding horses several are considered to be potential top horses, and one of those which is possible a future star in breeding as well as in sport is the gold medal mare “Cordia”, which was the Danish Warmblood Jumping Mare of the Year 2012. “Cordia” is by the internationally sought after Diamant de Semilly and out of the gold medal mare Coronet by Coronado. She is a good representative of Tage Petersen’s famous dam line, and “Cordia” also impressed the judges at the saddle grading and at the Elite Show to an extent that she was not only awarded a gold medal but also 9.5 for jumping capacity.

We also find very interesting horses in the dressage collection. Out of Lisbeth B. Andersen’s well-known dam line descending from thoroughbred mare Red Rose xx is the licensed stallion “Touché” by Tuschinski/Solos Landtinus. “Touché” achieved the score 8.5 for both rideability and canter at the 35-days test which he passed with more than 800 points. He is a high quality horse with a bright future and the assets for both sport and breeding.

The entire collection of auction horses with pedigree info, photos and videos can be viewed at Danish Warmblood’s website.