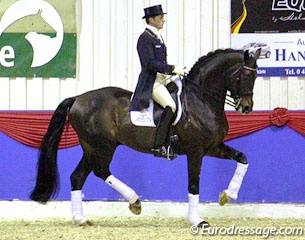 The 11-year old Oldenburg licensed stallion Rubin Cortes has moved back to Germany and has been put in training with German WEG team silver medalist Christoph Koschel in Hagen, Germany.

"A few weeks ago Mrs Wespe asked me if I would be interested in riding Rubin Cortes," Koschel told Eurodressage. "Two weeks ago I tried him at Lodbergen and I liked him a lot. One day later he arrived in our barn."

The 2003 Oldenburg reserve licensing champion by Rubin Royal x Calmiro is bred by Arsene Weiler in Luxembourg and is owned by the Dressage Performance Centre Lodbergen. He was initially discovered by Harli Seifert who sold the stallion to the Swiss owned Lodbergen centre in 2009.

The year before the stallion had already moved to Switzerland to be trained by Hendrik Lochthowe under the supervision of Silvia Ikle, but in 2011 Rubin Cortes relocated to The Netherlands to be trained by Edward Gal.

At the 2012 Oldenburg Stallion Parade on Saturday afternoon 24 November 2012 the stallion was surprisingly not presented by Gal but by Christoph Koschel, who has taken over the ride on the horse.

"The Althengst show came quick to find already all the buttons," Koschel explained. "I look forward to competing him in the future because he is a really nice character and a very nice horse!"