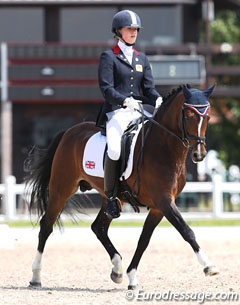 Amy Woodhead, 20, riding the German bred 15-year-old stallion Pardon, successfully defended her title in the Young Rider Championship, the results of which are determined by the combined score of the Team and Individual tests. This result was a close call, as second-placed Eilidh Grant and Comanche Crumble, a 16-year-old British mare by Cassander, finished on the same mark of 69.26%. Amy however edged ahead on collective marks to secure the title for the second consecutive year.

The FEI Junior title went to Georgia Davis and the 9-year-old gelding Richman’s Manta, a combination which was unbeaten in all three junior classes contested. Georgia, 16, from Swanmore, Hampshire achieved a combined score of 68.64% to take the title ahead of Joanna Thurman-Baker and Highcliffe Apollo on 68.26%.

Charlotte Fry,16, from Driffield, North Humberside, was victorious in the FEI Pony Championship with Andexer, Rosemary Shewen’s 10-year-old stallion with whom she was selected for the 2010 Pony Europeans. They won both the Team and Freestyle tests. The Pony Individual Test
was won by Rose Hugh-Smith with Holsteins Derwisch on a great score of  71.22%.