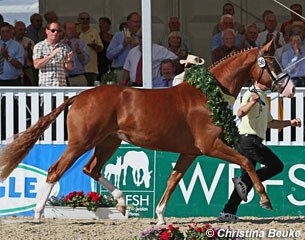 "The mares convinced with their outstanding quality, and this in all divisions," breeding manager Dr. Werner Schade summarized.

72 of the best three-year-old Hanoverian mares competed at the Verband's mare show. "A true athlete without any weak points. She convinced and delighted the audience any time. It must be a great feeling to ride her," were Scott Hassler's comments on the victorious dressage mare, state premium candidate Liliefee who was bred and exhibited by Friedo Dodenhoff, Horstedt.

The American dressage rider and instructor came to Verden as national coach of the US-team, and together with the well-known show jumping instructor Elmar Pollmann-Schweckhorst, Konrad Böth, member of the executive board of the Hannoveraner Verband, and breeding manager Dr. Werner Schade, acted as judge at the Herwart von der Decken-Show. And all of them agreed: The expressive chestnut mare displayed fantastic self-carriage and an incredible power from the hindquarter on the triangle and was rewarded with spontaneous applause from the well-crowded stands.

State premium candidate Luciana by Lauries Crusador xx  x Hohenstein dominated the division of halfbred mares when she entered the triangle as first mare of the competition. The dark-brown mare was bred by Uwe Heinrichs, Balje, and exhibited by Hermann Jarck, Himmelpforten. She left nothing to be desired as regards type and movement.