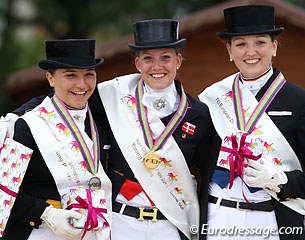 Danish Cathrine Dufour won her third gold medal at the 2012 European Young Riders Championships in Berne, Switzerland, on Sunday afternoon 15 July 2012 when she reigned supreme in the Kur to Music Finals with a young riders' World record score of 84.925%. Germans Charott Maria Schurmann and Florine Kienbaum won silver and bronze.

While the senior Intermediaire I Kur world record score is on Steffen Peters' name (87,000% - 2011 Pan American Games), the highest score ever ridden by a young rider in the Prix St Georges level kur has now been achieved by Dufour with her 84.925%. Fabienne Lutkemeier held the previous YR world record score of 81,350% achieved at the 2010 CDI Wiesbaden.

Cathrine Dufour and her 9-year old Danish bred gelding Atterupgaards Cassidy (by Caprimond x Donnerhall) rode a brilliant test in which the Danish rider took care of the smallest details: from the most elegant salute to the music to controling the paces of her horse to fit each section of the music.  Riding to music arranged by Jacquelien Vriese's Symphoneon Sound Design, Dufour rode to busy, almost overwhelming music which did not match the trot but which fit the canter work well (Led Zeppelin's Kashmir). 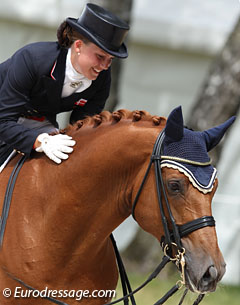 Throughout the competition the sensitive and hot chestnut gelding was ridden below tempo in order for the rider to have total control over him and unfortunately it was no different in the kur. Because Dufour rode in such a slow tempo -- the collected trot sometimes became too passaegy -- the tempo of the music was much too quick. The extended walk was gorgeous though. In canter the tempi changes lacked some ground cover but they were ridden correctly. The four tempi's and canter half passes matched the music beautifully and the precision of Dufour's riding was incredible. The beauty and elegance in Dufour's test made the combination a league of her own.

The judges agreed. Wessels, Leyman, Schule, Truppa, and Hamoen all ranked her first with a new world record of 84,925%. Dufour's first place and Kur gold medal were well earned without question, but her score was very generous considering the trailing tempo in trot. Her score set her too far apart from the rest of the top riders, who all performed outstanding tests. 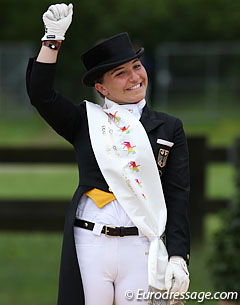 German Charlott Maria Schurmann captured her second individual silver medal by finishing second in the Kur. The 19-year old rode to upbeat, Celtic inspired music which came across as busy. The chunky chestnut stallion Burlington (by Breitling x Rohdiamant) was very forward and energetic in trot: big half passes and shoulders-in were strung together with huge trot extensions. In the collected walk the stallion's nose was a bit too much out. Schurmann took inspiration from the Grand Prix riders to put canter extensions, half pirouettes, following by a diagonal of tempi changes into her floorplan. The tempi changes were all ground covering. Charlott Maria rode a very strong test, but the harmony and smoothness could improve as the rider industriously half halted throughout the ride. 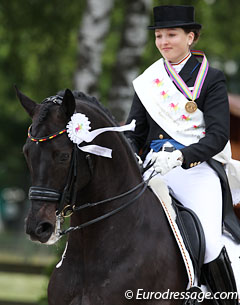 When it comes down to harmony, German Florine Kienbaum and her black Oldenburg gelding Don Windsor (by Don Cardinale x Waldstar xx) stood out and it wouldn't have been questionable if this combination had received the silver medal for their wonderful test. While their music was unimpressable, the horse and rider combination shone brightly. Her black gelding was trained to FEI level by Polish Katarzyna Milczarek and briefly owned and ridden by Romina Hoyzer before selling to Kienbaum. Don Windsor is a very graceful mover and the horse was dancing in the trot movements, but the canter was the highlight. Kienbaum rode a very nice medium canter on the half circle, there were strong tempi changes on the centerline and the pirouette left was amazing. In the pirouette right he became a bit tight in the neck. The collected walk was a bit short though, but overall it was a powerful test.

Kienbaum posted a score of 78.600% and the judges were quite on the same wavelength with their marks. 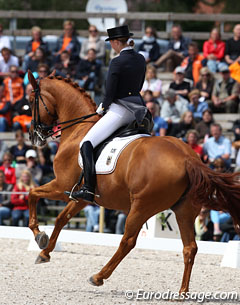 Multiple medal winning German Sanneke Rothenberger landed a fourth place in the kur aboard her Hanoverian mare Wolke Sieben (by Wolkenstein II x Hitchcock). For the 19-year old young rider competing in the freestyle with her sensitive chestnut mare is a challenge as Wolke Sieben tends to get hot. The rider tried to avoid the problem by turning the music down to such a low volume it couldn't even be considered background music. With the music almost inaudable it was hard to distinguish whether it matched the horse's gaits. So the focus went to her technical riding. The golden chestnut executed brilliant trot extensions but tension started to build up from the beginning of the test on the volte right before the half pass. The half passes had good cross over and the mare was well balanced. The collected walk became short, but the extended was good. Sanneke rode wonderful half pirouettes. The three tempi's were good but in the fours Wolke got very hot and lost ground cover.  The musical ending with the final halt was very abrupt as if someone had pressed the stop button. Rothenberger scored 76.350%. 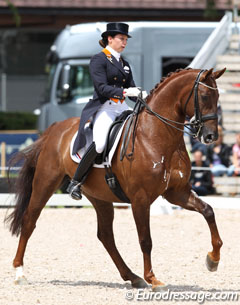 The best Dutch Young Rider in the Kur was Angela Krooswijk, who kept her best test of the week for last. Aboard her Westfalian gelding Flash (by Fidermark) the experienced Dutch rider, who is in her last year in this division, rode to a Joost Peeters' composed Michael Jackson freestyle. The trot was very rhythmical with the right tempo. The horse was always up in the frame and steady in the contact even though some of the halt halts could have been more subtle. Especially the canter matched the music well and the extensions were powerful. Krooswijk rode with much concentration and made no major mistakes. She scored 75.000% and finished fifth.