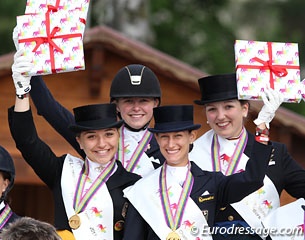 It was a glorious golden day for team Germany at the 2012 European Young Riders Championships in Berne, Switzerland, on Thursday afternoon 12 July 2012. The German dressage dames captured the team gold medal with a distinctive lead to the Danish silver medal winning team. Just like at the 2011 European Championships, The Netherlands had to be content with bronze even though their 2012 Euro-rides were an improvement.

The German effort was anchored by routinier Sanneke Rothenberger who this year focused on her second horse Wolke Sieben (by Wolkenstein II) for her young riders campaign because her 2011 European Young Riders Champion's horse Deveraux made the move to the Under 25 division. The chestnut mare is a totally different from Deveraux: more lightfooted, slightly lighter in the bridle, but less strong and cadenced than her black stall mate. However, in Berne Rothenberger rode a very convincing team championship test and scored 75.026% to finish second in the ranking.

Sanneke had total control over her very obedient mare and rode gorgeous trot extensions and half passes maintaining an ideal tempo. The collected walk was clean but in the left turn on the haunches there could have been a bit more impulsion. The extended walk had two hooves overstep but Wolke Sieben could reach a bit more forwards in the shoulder. In canter the mare could carry more weight on the hindquarters in the pirouettes but still Rothenberger rode all canter movements very smoothly. The four tempi's could have been a bit more forward but the threes were good. The extended canter was explosive and uphill and the rider struggled to achieve the collection for the flying change at the end of the diagonal. Rothenberger scored 75.026% and had  72.368 % as low score (Lang) and 77.105 % as high score (Wessels). 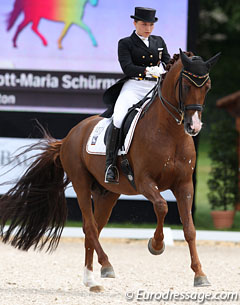 Charlott-Maria Schürmann and the chunky chestnut stallion Burlington (by Breitling W x Rohdiamant) finished third in the ranking and provided a large contribution to Germany's golden team score. Her Hanoverian stallion moved with much cadence and rhythm in trot and in the right  forward, yet collected frame. Unlike with her other top horse Donna Jackson, Schurmann has more difficulties on Burlington to keep her hands entirely still as they move a bit up and down in the rhythm of the horse. The extended walk was one of the best of the day, but the collected could have been clearer in the rhythm. The canter work was rock solid with superb tempi changes and extended canter. Overall it was a wonderful presentation but Burlington could have shown a bit more natural go. The pair scored  74.105 % but their marks veered between 70.263% (Truppa) and 77.894% (Schule).  Florine Kienbaum became the third rider for Germany with her 72.842% and fifth place in the ranking. Louisa Luttgen's test, which ranked her 7th (!!), served as scratch score (70.868%). 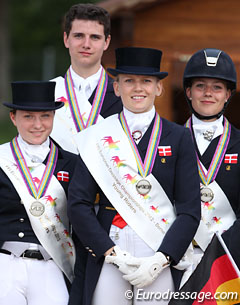 Team Denmark returned to the silver medal step on the podium after a brilliant ride by Cathrine Dufour on the Danish warmblood gelding Atterupgaards Cassidy (by Caprimond x Donnerhall). The finesse Dufour shows in her riding is almost unparalleled at these Championships. Her sensitive chestnut was quite impressed by the arena but Dufour bolstered all that energy well. The horse was always nicely at the poll, the nose even slightly out and he was totally steady in the frame. At all times uphill the horse is very consistent in the clarity of the rhythm even though most of the trot and canter work was ridden under tempo. The trot work was expressive with much bounce and swing, but the first medium trot was too conservative. The horse was quite tense in the collected walk but Dufour managed to ride good walk pirouettes. The extended walk was beautiful with almost four hooves overtrack. The canter pirouettes were a bit flat and Cassidy could have sat more in them and had more lift n the shoulder. The four tempi's were straight and correct, the threes could improve in ground cover. Dufour earned 76.289% from the judges with 73.947% (Lang) as low score and 78.157% as high score (Wessels). She topped the leader board in the team test. 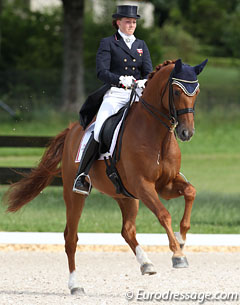 Dufour was strongly backed by Nanna Skodborg Merrald on the Danish gelding Millibar (by Milan) for securing team silver. While Cassidy was a bit slow in his tempo, Millibar was fresh and energetic. The dark bay gelding has much swing in trot and covers much ground. The extended walk was very good due to its nice relaxation. Merrald prepared her horse wonderfully for each canter pirouette but he could take more weight on the hindquarters in them. The tempi changes were all correct even though Millibar became a bit tense in the top line. The extended canter was nicely uphill. The duo received 73.132% from the judges to finish fourth overall. Merrald's scores also showed large discrepancies with a 69.343% from Truppa and a 75.395% from Hamoen. Andreas Kragekjaer became the third rider for Denmark with his 68.762% score and 11th place. Rikke Lindberg experienced some spookiness issues with Rigoletto and had the drop result. 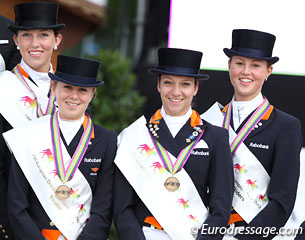 Even though the Dutch team riders were considered gold medal hopefuls, the four experienced members could not fulfil the expectations and were unable to grab that coveted number one medal. They all put in very strong rides but the competition this year was simply very tough.

Leading Dutch lady was Stephanie Kooijman on the black Dutch warmblood gelding Winston (by OO Seven x Rhodium). In Berne the 8-year old has improved throughout the season and showed excellent form up to his current ability. The trot was full of bounce, ground cover and forwardness and the extensions had massive ground cover and freedom in the shoulder, but the gelding pushed himself slightly high in the neck. Also the half pass right could have had a bit more bending. The walk pirouette left was good, in the right one there was some loss of balance. The extended walk had two hooves overtrack but could have been a bit more energetic. Kooijman had her hands quite far apart in order for Winston to lower his head. The gelding showed very good improvement in the canter work, coping better with the collection in the pirouettes than before. The tempi changes were big and straight. The final flying change after the powerful canter extension could have been ridden more subtly. Kooijman scored 72.368% and finished sixth. Her marks ranged between 68.289 (Truppa) to 76.052 (Hamoen). 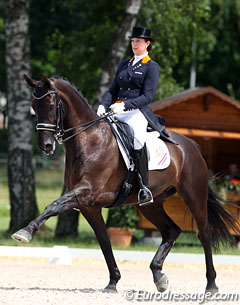 Danielle Houtvast became Holland's number two after having scored 70.500 % (8th) on Wednesday in the first group of riders. The very experienced Angela Krooswijk was The Netherlands' last rider to go and she finished 9th with 70.132 %. Krooswijk and her Westfalian gelding Flash (by Fidermark) made several smaller mistakes which are atypical for the pair. The first trot extension was very expressive but there was a mistake in the rhythm in the second one. The trot movements were all executed in a good flow. The collected walk was very slow but the turns on the haunches were good. The extended walk convinced in overtrack but could have been more energetic and the horse should have stretched the neck more. The left canter pirouette lacked bending, the right one was ok. In the four tempi's the horse stumbled on the diagonal but the changes itself were good. There was a mistake in the threes. Michelle van Lanen and her tall liver chestnut Urchin B rode the Dutch drop score of 69.895%.