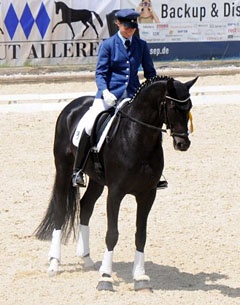 The 5-year old Ritz Carlton won the only Bundeschampionate qualification class at the regional show held at the Bavarian Hofgut Allerer on 29 June - 1 July 2012. The competition boasted an experienced panel of judges with Katrina Wüst, Uwe Mechlen and dr. Colin Magg at the show to assess the L-level dressage horse test.

The show was plagued by bad weather with incessant rain on the first and last day of the competition. The organizers were delayed in raising the stabling tent on Thursday with horses arriving at the show grounds in the afternoon and the tent was not ready until the evening. The riders, however, were patient and in the end everything went smoothly.

In the 5-year old division Friederike Schulz-Wallner and the Bavarian bred Ritz Carlton (by Rivero III x Pour Plaisir) were the winners with an 8.0 overall score. The dark bay stallion scored 8.5 for trot, 8 for walk, 7.5 for canter, 7.5 for submission and 8.5 for general impression. Rudolf Widmann and the Oldenburg bred stallion Romanist (by Rohdiamant x De Niro) finished second with 7.9. His dark bay stallion scored 8 for trot and general impression, 8.5 for walk and 7.5 for canter and submission.

Back to the 2012 Bundeschampionate Index