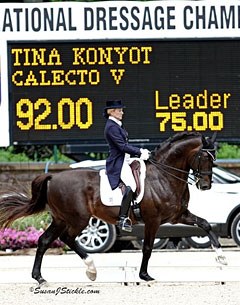 Tina Konyot and Calecto V picked a good day to have their test of a lifetime. They stormed to the win in Friday's FEI Grand Prix test with a very determined performance to top the Grand Prix National Championship's third test of four. The 14-year-old Danish Warmblood stallion and Konyot scored above 80% for the first time in their career together.

Konyot (Palm City, FL) and Calecto V (by Come Back II) won the 2010 U.S. Grand Prix Dressage Championship and represented the U.S. at the 2010 World Equestrian Games. Today's performance at the 2012 U.S. Championships marked their personal best and Konyot thinks there is even more to come despite scoring 80.149% today.

"I was just so concentrated and focused as I'm trying to be right now," said Konyot. "I was just so happy, he felt so good - I know I can still improve an awful lot on my piaffe and passage transitions and I can make them better. I look forward to doing that, I can get it in the warm-up. He did feel great, I'm so happy."

Konyot received tremendous marks for her entry (the scoreboard showed 92% at one point) to the test and continued to ride for every point, the judging panel of Janet Foy, Lois Yukins, Linda Zang, Jane Weatherwax and Hilda Gurney rewarded her brave and accurate effort. Beautiful flying changes highlighted exceptional canter work.

"I think my entrances have been really good in all three tests," said Konyot. "He just does a beautiful halt. Like a feather landing, so soft and square."

It didn't, however, change the overall leader of the championships: Steffen Peters lock on the 2012 title remained unchanged as he rode Legolas (by Laomedon x Florestan) to the second place on a score of 78.466%. A mistake in the one-tempi changes marred an otherwise clean test - with scores hovering around the 80% mark for the majority of it. Four Winds Farm's 10-year-old Wesfalian gelding was imported to the U.S. in December and he and Peters have been quick to forge a partnership.

The Grand Prix Championship also serves as the Olympic Selection Trial for the U.S. Dressage Team, and Peters feels that Legolas has secured his position as a back-up for his veteran Ravel, who was given a bye from this event. Ravel was fourth at the 2008 Olympic Games and also won the 2009 Rolex/FEI World Cup Final.

Jan Ebeling (Moorpark, CA) and Amy Ebeling and Ann Romney's Rafalca put in an improved effort from last week and reinforced their third place standing with a score of 75.255%. Ebeling and the 15-year-old Oldenburg mare (by Argentinus x Rubinstein) chalked up their best score to date and took one step closer to their Olympic dreams.

"I try to ride the way I ride at home," said Ebeling. "I try my best at home so that way when I come to the horse show it's just another day at the office. I think that over the years that has become our strength, the horse has gotten really consistent and really dependable we had a little bobble there on the diagonal with the one-tempis and I guess that was me losing my balance a little bit, it wasn't the horse making a mistake, it was just her responding to what I was doing. But I'm very happy - it was my best score yet."