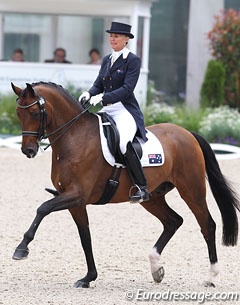 Equestrian Australia (EA) has today announced the 2012 National Squads. The “Elite” and “A” listed combinations for each discipline; Dressage, Eventing, Jumping and Para-Equestrian will form the Shadow Teams for the 2012 Olympic and Paralympic Games.

Brett Mace, Equestrian Australia’s High Performance Manager, explains the composition of the Shadow Teams.  “The “Elite” listed combinations are presently the front-runners for the Olympic and Paralympic teams.  However, I am sure our “A” Squad members will make the most of every opportunity to claim a place on the team through exceptional performances in the lead up to London.

“With a mixture of experienced Olympians and Paralympians on these Shadow Teams, along with some very high quality riders looking to make their first Olympic/Paralympic team, I am confident we can justify our high expectations for medal performances in London,” added Mr. Mace.

Combinations will not be listed on the EA National Squads unless they have returned their signed ‘Consent to Nomination Form’ to the EA office. The inclusion of some combinations is still pending this paperwork and they will be added in due course.

Combinations not currently listed may be added to the Shadow Teams in the coming months should performances warrant their inclusion.

EA National Young Rider Squads will be announced at the end of January.