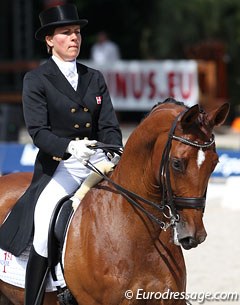 The Danish Equestrian Federation has announced the Olympic Long List of seven combinations which will fight for the a Danish team and individual spot leading up to the 2012 Olympic Games in London on 2 - 9 August 2012.

The Olympic team will be decided upon after the Nations' Cup at the 2012 CDIO Aachen on 6 July 2012.

Danish team trainer Rudolf Zeilinger takes several criteria into consideration for team selection. They are the combinations' results, their stability in performance as well as the individual potential of the combination. Zeilinger will also have the possibility to add combinations to the long list if a rider and horse excel during the 2012 show season.