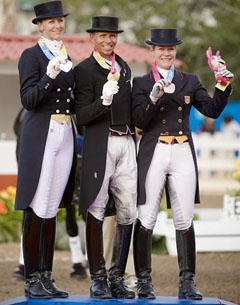 The U.S. Dressage Team continued to own the Guadalajara Country Club’s beautiful dressage arena, extending their medal run at the 2011 Pan American Games. The American riders added Individual Gold, Silver and Bronze to the Team Gold they won on Sunday, as all three scored better than 80 percent in Wednesday's freestyle.

Steffen Peters (San Diego, CA) wasn't sure it would be possible to top Heather Blitz (Wellington, FL) and Paragon's mark of 86.650%, but he rode with a fierce determination and got every point out of Weltino's Magic. They scored 87.300% for their freestyle to music by 7and5 for a combined average of 82.690%. Jan and Bruce Hlavacek’s 9-year-old Westphalian gelding gave Peters his second Gold medal of these Games.

“What an amazing day and an amazing competition,” said the Olympic medalist. “I still have to think about the moment that I came out of the arena and when the scores were announced it probably took 30 seconds, but it seemed like three hours. It is a very exciting day, congratulations to my teammates. The big score that Heather pulled in – I don’t think I’ve ever had that much pressure going into the arena knowing that there was an 86 percent in front of me.”

A steely veteran, Peters faced the pressure and delivered – adding a second Pan Am Gold to a résumé that includes Olympic Bronze, a World Cup Dressage title and two Individual Bronze medals at the 2010 Alltech FEI World Equestrian Games

Blitz and Paragon wowed the crowd with Paragon's effortless movement and spectacular paces. At just eight years old, he is an exciting horse for the future. Their two-day average was 81.917%.

“I hit all the parts of the music, that’s always a great feeling,” said Blitz. “That’s just so satisfying. Paragon went in, and when I first picked him up, because I walk first, when I picked him up for the canter, there was just a glimpse of him saying, ‘I don’t know about this.’ But then he erased that and then the rest of he test he was completely on autopilot, yet he was still listening to me. He felt so smooth and expressive, but he was so listening. I can believe it because I know he can do it, but I still can’t believe it.”

Marisa Festerling (Moorpark, CA) wasn't going to leave these Games without another medal, and she had the ride of her life on Big Tyme to secure Bronze with a freestyle score of 80.775% and an overall average of 77.545%. She managed Big Tyme's enthusiasm impeccably and, like Blitz and Paragon, both horse and rider made two trips to the podium at their very first Games.

“It was awesome, the atmosphere was very, very electric,” said Festerling. “But ‘Frankie’ kept it together in there. I was thrilled. He has come out here every single day and given me more and more. And in this kind of competition you couldn’t ask for more.”

The 10-year-old Belgian Warmblood was full of power throughout his freestyle to music by the Beatles and Festerling rode with accuracy and poise on the biggest stage of her career.

The U.S. triple marked the first time the Individual medals have been swept by one nation in dressage at the Pan American Games.