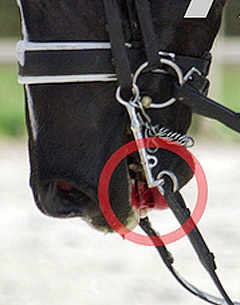 In reaction to our article "Dressage to Become a Blood Sport" and the numerous emails against the proposed blood rule which the FEI has received on the matter, the International Equestrian Federation has released the following statement:

The FEI has never, and will never, allow any horse with blood anywhere on its body to remain in the Dressage arena.

As the current Dressage rules are not specific on the issue of blood, the FEI Dressage Committee, in June of this year, proposed a new rule clarifying that Dressage tests would be stopped immediately if blood appears anywhere on the horse in the arena. The proposal from the Dressage Committee, which will be voted on at the FEI General Assembly next month states this very clearly.

The only proposed exception to this rule would be at the following top level events: Olympic Games, World Equestrian Games™, Continental Championships at Grand Prix level and World Cup™ Finals. If blood is seen on a horse at these top level events, the test would be stopped immediately, but FEI veterinary officials would examine the horse when it is leaving the arena. If the bleeding from a minor injury has already stopped, and the FEI veterinarian confirms that it is not a horse welfare issue,  the horse would be allowed to continue the test. If the bleeding has not stopped, or the FEI veterinarian could not confirm that it is not a welfare issue, the horse would be eliminated.

This is the only exception that has been proposed, and would still result in a test being stopped if blood is seen on a horse, but allows for examination by an FEI veterinarian specifically appointed to this task. At all other events bleeding would result in immediate elimination.

The National Federations are currently reviewing the proposal.

As always, proposed rules revisions are presented for National Federation approval at the FEI General Assembly for implementation on 1 January the following year.

This statement is also available on the FEI website here.

(Our reply to this statement has been the following: I find it very interesting that this statement confirms that the Dressage Committee has not taken the opinion of the IDRC/IDOC nor AIDEO into consideration but has simply made "National Federations aware of the views". Pretty much says enough that they decide on their own.  Also if a horse is allowed to continue its test even though it has been injured with a bite of the tongue or lip (no matter how minor it is) it does not reflect good on the sport. Furthermore the proposed rule poses such a string of problems which it is like opening pandora's box! What if the last horse in the class bites its lip? How long will it take for a re-run? The entire competition will be put on hold. I'm sure the TV-stations will love that! How fair is it to allow a horse to re-enter the competition as last horse to go (or in breaks, not defined in the proposed rule!!) knowing that the judges' scores rise towards the end of the class. It's actually quite beneficial for the rider from that viewpoint. And now that we are talking about fairness: nice that elite riders at the major championships are allowed a re-run while other serious riders, such as the pony/junior/young riders/pan Am riders, are not allowed a re-run. The proposed rule is immoral and impractical and utter non-sense.)

Related Links
Sign the Petition Against the No Blood Rule
Dressage to Become a Blood Sport?!