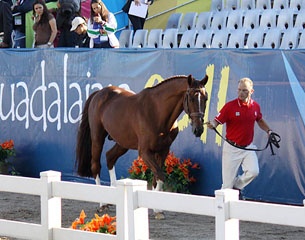 The XVI Pan American Games officially began with a spectacular Opening Ceremonies on Friday evening, October 14. Equestrian sport begins with Dressage, the first of the three equestrian disciplines to contest team and individual medals, held at the Guadalajara Country Club near the city centre.

A record number of entries for the Pan American Games – 47 horses representing 14 nations – were presented to the FEI Ground Jury for the mandatory horse inspection on the morning of October 15.  All four Canadian team horses passed the inspection, and returned to the main stadium later in the day for a training session in preparation for the team competition.

Dvorak was the highest placed Canadian dressage rider at the 2007 Pan Am Games in Rio de Janeiro, Brazil, finishing fourth individually.  Of the four team members in Mexico, Dvorak is the only one with major games experience.  Dvorak’s three teammates are all making their Canadian Dressage Team debut.  Canada won Team Silver medals at both the 2003 and 2007 Pan American Games, and must finish in the top two in Guadalajara, excluding the United States who is already qualified, in order to earn a team berth for the 2012 Olympic Games in London.

“The horses travelled very well and came off the plane looking great,” said Canadian Equestrian Team Leader Kerri McGregor of Newmarket, ON.  “They settled in easily at the venue and while there was quite a lot of rain earlier in the week, the training session on Friday went well.  Everybody’s spirits are very high.”

McGregor also noted that it was a testament to the team’s confidence in the readiness of their horses that three athletes, two grooms and the Team Veterinarian, Dr. Alan Manning, attended the opening ceremonies on Friday evening. 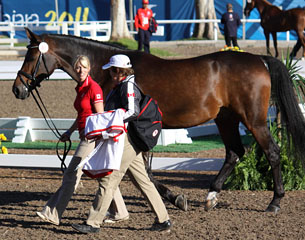 The Prix St. Georges competition, which will determine the team medals, will begin at 8:30 a.m. on Sunday, October 16.  Canada has drawn the fourth in the starting order out of 12 teams.  Byng-Morris will lead the way for her country riding Reiki Tyme, followed by Kroetch on Lymrix.  Irwin and Winston will ride third in the order for Canada while Dvorak and Viva’s Salieri will compete in the anchor position near the end of the competition.  The best three performances will count towards Canada’s final team score.   The Team medal ceremony will be held at the conclusion of the Prix St. Georges competition, scheduled to end at 6 p.m.

The competition schedule for Dressage at the 2011 Pan American Games is as follows: