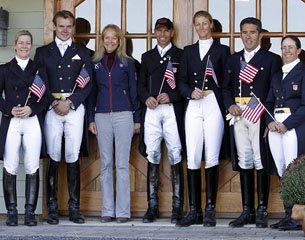 Four American team members and two substitutes have spent the last few days training at Hope Greenfield's Sixteen Hands Farm in New Jersey under the guidance of Technical Advisor Anne Gribbons. The U.S. team has been putting the finishing touches on their performances before the four team horses depart on Tuesday, October 11.

Team members include Heather Blitz on Paragon, Marisa Festerling on Big Tyme, Cesar Parra and Grandioso, and Steffen Peters on Weltino's Magic along with substitute riders Endel Ots and Toscano and Heather Mason on Warsteiner.

"The Pan American dressage team members plus two reserves are busy polishing their tests before leaving for Mexico," said Gribbons. "After training during the week, we had a dress rehearsal on Friday. Each of the six riders performed the team test, the Prix St Georges, in full dress with horses braided and tack inspection as in a regular show. Lisa Schmidt volunteered to be the side judge, and she assisted me in the judging, as well as in the video session and discussions after the test riding."

"The training will continue through the weekend until departure early next week," said Gribbons. "We have a very strong field of horses, the riders are getting along beautifully and are ready for the challenge. We are looking forward to the Games."

The dressage horses will begin their competition on October 15th.