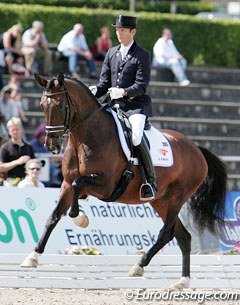 The Dutch warmblood Grand Prix mare Twinkel has been maintained as a ride for Willem Jan Schotte. Rob van Puijenbroek of brood farm de Begijnhoeve acquired a 50% share in the ownership of the mare so the horse can stay with Schotte.

Twinkel (by Freestyle x Hamlet x Naturel) has been with the now Belgian based Schotte since she was a young horse. Willem Jan competed her at the 2006 World Young Horse Championships in Verden in the 6-year old division and became 2008 Dutch Indoor Dressage Champion at ZZ-Zwaar level (Fourth level).

Six months ago the mare moved to Hubertus Schmidt's barn in Germany to be sold. Schmidt competed her successfully in Hagen, Wiesbaden and Lingen.

Van Puijenbroek's acquisition means the horse has been preserved for Dutch rider who can now focus on his own international future with her.