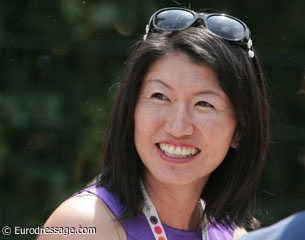 As part of the overall USEF Dressage High Performance Program, the USEF is expanding the Dressage Developing Program, in 2012 thanks to the generous support from the USET Foundation through a gift from USET Foundation Trustee Akiko Yamazaki.

The Developing Program will include seven Developing Clinics and two Developing Training Camps in 2012. Under the guidance of USEF Developing Coach Debbie McDonald, the clinics and camps aid in the development of the nation's up-and-coming dressage horses and riders who show potential to represent the U.S. in international competition.

New in 2012, the clinic schedule is set to include Developing Training Camps in the fall. These four day sessions will include individual lessons with McDonald and group discussions on topics ranging from sports psychology to media training. Invitations to these camps will be based on rider's performances at Developing Clinics and in CDI competitions throughout the year. There will be two camps, one held in New Jersey and one in California.

Taking place in Florida, New Jersey and California, the clinics will be by invitation only, based on the criteria set forth by the USEF High Performance Dressage Committee. Priority is given to those athlete/horse combinations that are on the Developing Rider list for training.

"Akiko's knowledge and her passion for Dressage has been a motivating influence for this country's high performance programs. She is not only a true leader as a horse owner but also in her charitable giving in support of our United States Equestrian Teams", remarked Jane Forbes Clark, USET Foundation President.

"I would like to thank Akiko and the USET Foundation for their continued and generous support of this country's high performance programs. Akiko's vision for a stronger country with more depth is exciting," said McDonald. "We all want to see the sport in this country grow and realize it is not going to happen overnight. I am excited about the idea of taking a few combinations from each coast at the end of year and having a multiple-day camp. Working together we will build the future of dressage in the US."