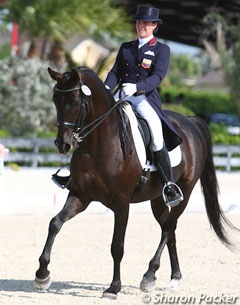 The Venezuelan equestrian federation has selected the team that will represent Venezuela at the 2011 Pan American Games in Guadalajara, Mexico, on 16 - 19 October 2011. The Venezuelan delegation in all three disciplines is assisted by Rubén Rojas (chief of the delegation), Francisco Mendoza (technical director) and Mónica García.

Patricia Ferrando and Alpha´s Why not are appointed as reserve riders.

Most Venezuelan dressage riders have been based in the U.S. this 2011 show season, where some of them were coached by Belgian Mexican Patrick Burssens,. At the Pan Ams the team will be trained by Mark Boblet and Juan Matute

"This is an achievement we had set out in the working groups, but it couldn't have happened without the major financial support from the Ministry of Sport," said the press officer of the Venezuelan equestrian federation. "We had to bring international judges to do the qualifiers and had to meet with the requirements of the FEI."