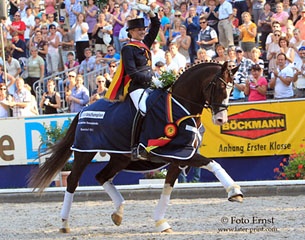 Crowd favourite Callaho's Benicio took the gold medal in the 6-year old Dressage Horse Finals at the 2011 Bundeschampionate in Warendorf, Germany, on Saturday afternoon 3 September 2011. Under Anna Sophie Fiebelkorn, the coloured liver chestnut stallion scored a phenomenal 9.40 to beat Uta Gräf on Damon Jerome H, who was breathing down the winner's neck with her 9.3 score. The bronze went to Ralf Kornprobst on Freckle.

Uta Gräf and Damon Jerome H were the leaders after the preliminary test, but shooting star, Benicio, became the talk of the town as the South African owned Hanoverian licensed stallion came out of no where to place second. Something new is always liked and that was obvious in the finals as the super sympathetic stallion got high scores thrown at him like confetti.

Fiebelkorn and Benicio (by Belissimo M x Velten Third xx) thrilled the crowds with their incredibly active and lightfooted movements. The stallion has tremendous freedom in the shoulder and wonderful rhythm and bounce in trot. His hind legs track up well but he could be a bit stronger and quicker from behind. The extended trot was lovely, the trot half pass right fantastic but the horse could have been more steady in the head position. The walk was very ground covering and well regulated. In canter, the horse maintained the uphill tendency and was expressive in the gait as well as in his huge, correct flying changes. He stayed active in counter canter. In the last flying change he slightly knocked against the edge of the arena but that brought him hardly out of balance. The biggest issue with this horse at the moment is that he very often became deep and should have kept the poll as highest point, which he hardly had. In the lateral movements and counter canter he tilted his head regularly. Nevertheless Benicio is a very appealing dressage horse as if the chunkier version of Nadine Capellmann's world champion Farbenfroh.

"This is a horse to fall in love with," said judge commentator Christoph Hess. And the judges' panel showed their infatuation with Benicio in their scores. They gave him 10 for trot and walk, 9 for canter, 8.5 for submission and 9.5 for general impression, which totalled 9.40 overall. Benicio is a horse with all the potential for the future FEI work and with his sizzling gaits he certainly displayed his show stopping qualities despite the imperfect bit contact.

Uta Gräf and her more seasoned Rhinelander licensed stallion Damon Jerome H (by Damon Hill x Guy Laroche) finished in second place with 9.3. The liver chestnut stallion lacks the dynamics and elasticity which Benicio has so abundantly, but Gräf's horse was so well ridden, so correct in all movements and so pure in his gaits.

Gräf knew she had to give it her all if she wanted to have gold at the Bundeschampionate and presented "DJ" with more energy and freshness, which was great. The horse is unbelievable constant and uphill in the frame. The contact is steady and soft. Compared to their preliminary test, the horse had improved on the bending in the corners and half passes. There was a slight mistake in the rhythm in the medium trot but the horse was extremely cadenced and perfect in his self-carriage otherwise. DJ misses that bit of roundness in his gaits which makes Benicio so spectacular, but he stands out from the rest by being 100% on the aids. The extended walk was fantastic in relaxation and ground cover. Gräf highlighted the transitions between collected, medium and extended canter very well. The final halt was not entire immobile.

It was a thrilling finals and interesting to see whether the judges would place talent and potential ahead of correctness and supreme rideability. They scored Damon Jerome's trot and walk with a 9.0 mark. The canter was good for a 9.5 as well as the rideability. Hess stated that they wondered whether to give a 10 or a 9.5 but decided upon 9.5 because they could hear a slight grinding of the teeth. The judges' decision to stick to 9.5 was a clear sign that they preferred the less confirmed but more spectacular Benicio over the perfectly presented but less extravagant Damon Jerome H. With another 9.5 for general impression, the combination got silver with 9.3.

Ralf Kornprobst and the super talented Westfalian gelding Freckle (by Future x Gribaldi) already gave glimpses of their star quality in the first round, but were not yet settled in the ring and with a strict and meagre score of 7.3 they landed 29th place and had to go to the consolation finals. The sweet bay gelding recovered wonderfully on Friday and scored 8.0 to place third and earn a spot in the finals. Today the horse was solid and strong in the Finals. Freckle has wonderful knee action, tracks up from behind is elastic in trot and uphill in canter. He is just the greener version of a 6-year old with little less talent that his superior placed peers.

Back to the 2011 Bundeschampionate index