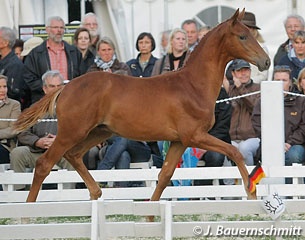 The chestnut colt Tudor became the top selling foal at the small Trakehner Foal auction held in Hanover, Germany, on 23 July 2011. Twenty foals were up for auction and Tudor became the best seller with a knock down price of 15,500 euro.

Tudor is bred by the Gellhaar family and is by Iskander out of Tugga (by EH Sixtus x Condus). He was acquired by a group of breeders from the Trakehner studs Hämelschenburg and Panker.

The average price for a foal at this auction was 6,800 euro.