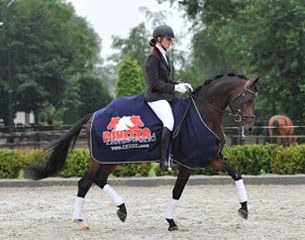 Nero van den Hout, Tiesto and Hertenshof Nairobi were the winners of the 2011 Dutch Young Pony Championships held at the national Welsh pony breed show in Kootwijk, The Netherlands, on Saturday 20 August 2011. Through a series of selection trials, twenty 4-, 5- and 6-year olds qualified to compete at the national finals for the title.

Judges Adriaan Hamoen and Peter Bonhof assesses the ponies on their gaits, self carriage, suppleness, conformation and general impression. The top five of each age division were test ridden by guest judge riders Danielle van Mierlo, Jenny Schreven and Antoinette te Riele. "This year we had even nicer ponies in the finals than last year. The 4-year olds were equally as good as the 5 and 6-year olds," said Jenny Schreven.

Five stallions ranked in the top five in the 4-year old division. The licensed stallion Nero van den Hout (by Orchard Red Prince) became the champion under Jody Tissen. The dark bay stallion ended up with an 82.2 score. "Nero van den Hout has a lot of spunk, but also much quality which I like," said guest judge rider Jenny Schreven. Rachel Fokker rode two ponies in the finals. With Brouwershavens Diamond (by Wengelo's Ricardo) she became reserve champion on 79.4 points. "This pony has a very good canter but in trot you noticed this young pony got tired," said Schreven. Demi Kurstjens and Empire (by Einderhof Jamai) were third with 79.3 points.

The Welsh pony stallion Bodo was very well represented in the 5-year old Finals with three ponies in the top five. Jody Tissen rode Tiesto (by Bodo) to the champion's title with 84.77 points. This is Tiesto's second consecutive national title. "A nice pony who is attentive to the aids, nice in the contact and with a very uphill canter," said guest judge rider Antoinette te Riele. Rosalie Bos and Paso Double (by Bodo) were the reserve champions with 78.97 points, followed by Stefanie Verkooijen on Kulbergs Orion (by Tongerenhof Peridoot) with 76.93 points.

Merecedes Verweij has only been riding Hertenshof Nairobi (by Woldhoeve’s Silco) for two months but her efforts paid off as they became the 6-year old champions with 90 points. "Hertenhofs Nairobi is a very nice pony with much potential to shift between collection and extension behind. He's a real pony for the future," said guest judge rider Danielle van Mierlo. Dutch pony team rider Febe van Zwambagt was second with FS Dr. Watson (by Don't Worry) with 81.67 points, followed by Marjan Hooge on the dark bay Diamonds are Forever (by Diamond) with 81.53 points.