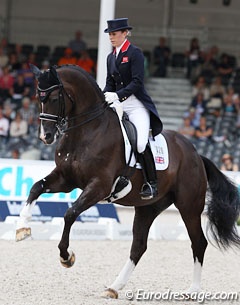 Charlotte Dujardin and Team Great Britain have taken a firm lead in the team championship competition at the 2011 European Dressage Championships in Rotterdam, The Netherlands, on Wednesday 17 August 2011. Thirty riders competed today in the first group of the Grand Prix and as silky smooth as cream the 26-year old Dujardin rose to the top with a personal best score of 78.830%.

Carl Hester's assistent trainer Charlotte Dujardin is a beautiful rider riding one of the most amazing dressage horses in the world at the moment. Carl and Roly Luard's 9-year old Dutch warmblood  gelding Valegro (by Negro) stunned the crowds and judges with their brilliant test in which Charlotte's impeccable soft and stylish riding emphasized the harmony between rider and horse.

Valegro has mind blowing trot extensions which should put straight 10s on the scoreboard. Instead she got 8s and 9s for it. All halts in the test were on the dot, the half passes were bouncy but could have been slightly more up in the frame. The first piaffe was fantastic: excellent rhythm and great sit. The passage was regular and engaged. In the extended walk there could have been slightly more overtrack. A disruption in the second piaffe meddled with the smooth rhythm. The canter work was outstanding: big extension, ground covering one tempi's and wonderful pirouettes. Only in the two tempi's the horse could have been straighter in the body. Charlotte scored 78.830% but the 80% was certainly within reach had the horse been a tad more open in the contact and forward in the collected work. 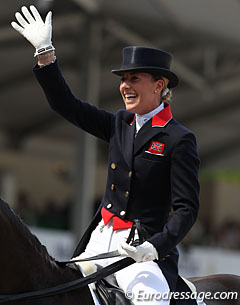 "I had a fantastic ride today," said a beaming but still modest Dujardin at the press conference. "He was brilliantly on par with me." Charlotte explained that she just couldn't believe how well Valegro had been going in the warm up. "He just did everything and I thought: "oh my god." Their excellent warm up translated into their record breaking test.

As a new comer on the team Charlotte embraced the opportunity of competing for team Great Britain. "It's a chance to even get here. I was very keen wanting to do well." The young Brit kept her cool amazingly and was totally focused on her ride. "I do the arena like I do at home. It's my way to stay calm." Head of the ground jury Wojciech Markowski joked, "I like to be so cool as Charlotte was today."

The British dressage team is currently leading the nations' ranking with 149.256 points and Emile Faurie contributed 70.426 of those points. The more experienced rider on the team finished sixth so far aboard Joanne Vaughan's Danish warmblood gelding Elmegardens Marquis (by Michellino). 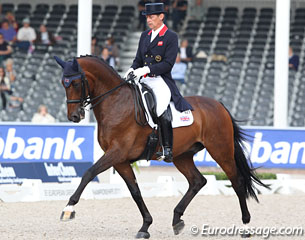 The long legged bay gelding was very obedient and listened to his rider throughout the test. He kept a beautiful rhythm in the piaffe and stayed well on the spot. The left pirouette was a bit big and in general Marquis' nose should be more out. Nevertheless it was a high quality ride and Faurie appeared very satisfied with his accomplishment.

"It was a great experience today. I'm particularly pleased with my horse. He was relaxed and did everything I asked," Faurie explained.

The German team is currently in silver position after two solid but slightly disappointing rounds from Christoph Koschel and Helen Langehanenberg. Both riders are usually scoring in the mid seventies but mistakes kept them from rising above 72%. Their team total is currently 142.523 points. 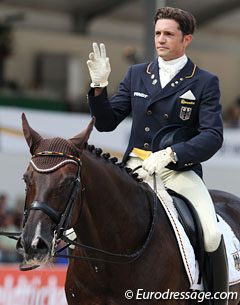 Koschel and his lovely liver chestnut gelding Donnperignon (by Donnerhall x Mozart II) remained unphased when lorries were being unloaded from their cargo for the catering tents during his ride. He started out with a strong halt at entry, following by a good lengthening in trot. The half pass right could have had more flow, the one to the left was better.  The second trot extension was a bit conservative. Donnperignon's passage is always a highlight in his test. The first piaffe, however, was small and the horse crawled behind the vertical. The relaxation in walk was good. The second piaffe could have been bounced more but was regular in rhythm. Koschel dropped the ball in canter as the horse had to be more collected in the zig zag. One flying change was short behind in the two tempi's and mistakes crept into the ones as the horse was tight in the neck and deep. The canter extension was excellent. They received 71.444% for their ride and are currently placed second.

"I had mistakes I normally don't make. My horse is normally very good in the tempi's," said a puzzled Koschel at the press conference. "I could't get the feeling from outside inside the arena. I'm disappointed as I expected much more." 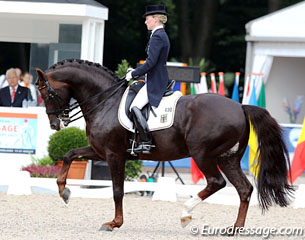 Team mate Helen Langehanenberg was the first German to go as second rider of the day. Christian Becks' gorgeous Westfalian licensed stallion Damon Hill (by Donnerhall x Rubinstein) was not on greatest form in this Grand Prix. The liver chestnut dancer is a very graceful mover and Langehanenberg rides him with much lightness and delicacy but there were too many mistakes in the regularity of the rhythm -- in the extended trot and second piaffe and passage -- to get those big scores. Also in canter, Damon Hill has been sharper to the leg. The zig zag lacked some ground cover and there was a mistake in the one tempi's which should have been more ground covering anyway. Even though the pair is a beautiful one to watch, there is certainly more in their tank. They scored 71.079 and finished third provisionally.

Langehanenberg did not mind starting so early in the day. "Somebody has to make a start," she said. "If you ride well you get your points, even at the beginning. I had some mistakes which were bad for us. I lost a lot of points. But he was really great in the warm up." 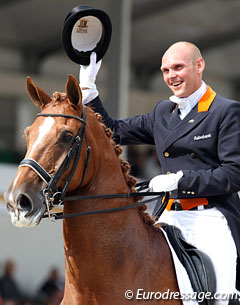 So far the Dutch team is in bronze medal position with 141.490 points, ranking behind Germany with a minor percentage difference. Sander Marijnissen was the first Dutch rider to go and made no mistakes. His experienced 17-year old Dutch gelding Moedwil (by Goodwil) showed off his routine and travel. The trot extensions were wonderful and the first piaffe was lovely. In passage the chestnut should have more engaged from behind but he was regular. The second piaffe was slightly forward and the canter strike off was hesitant. The pirouettes were slightly big and the one tempi's could have been more uphill but all in all it was a very neat test. He received 70.578% from the judges panel and finished fifth.

"I had a really good ride and am happy with my horse," said Marijnissen. "He was in good shape and made no mistakes."

Dutch Olympian Hans Peter Minderhoud and his 16-year old Dutch mare Nadine (by Partout x Roemer) were the last to go today and much rested on their shoulders to crank up the team score. The refined chestnut has fantastic trot extensions with huge scope in her front leg and decent overtrack. The left half pass was less elastic as the right one and the passage was regular in rhythmical. For years Nadine has struggled with the piaffe and that remained unaltered. She shows little flexion in the hind legs and gets very wide in front, but Minderhoud did a good job at keeping it all regular and in rhythm. The relaxation was decent in the extended walk, but she could have shown more overstep. The two tempi's were ground covering but needed to be straighter in the body. There was a hiccup at the end of the extended canter when Nadine braked abruptly. The one tempi's were good and the pirouettes small. Minderhoud posted a score of 70.912%, which put him fourth for now. 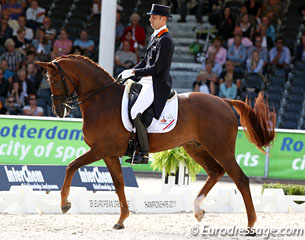 "I'm not completely happy," Hans Peter admitted after his ride. "I was hoping that maybe I could beat Germany and put the team up to second place, but I had the mistake after the extended canter. She was looking at the camera. On the last centerline I never know what she is going to do. There was some tension."

The Grand Prix is judged by O-judges Evi Eisenhardt (GER), Maribel Alonso (MEX), Stephen Clarke (GBR), Wojtek Markowski (POL), Jean Michel Roudier (FRA), Mary Seefried (AUS) and Ghislain Fouarge (NED). The Judging Supervisory Panel is also on duty and after the morning session they had changed 8 scores out of 4,000 given so far. "That means 0,2% of the marks were changed," explained FEI Dressage Director Trond Asmyr.

The Grand Prix continues tomorrow at 9.30 AM with the second group of riders, whose performances will be instrumental for the final team
ranking.