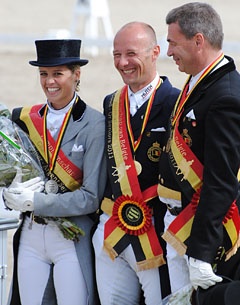 Jeroen Devroe reconquered his national Grand Prix champion's title at the 2011 Belgian Dressage Championships held at the Flanders Dressage Event at Stable Hulsterlo in Meerdonk, Belgium, on 4 - 7 August 2011. For the seventh time, Devroe got the gold medal and stood on the highest step of the podium. Julie de Deken finished with silver, while Johan Zagers ended up with bronze.

Aboard the Belgian warmblood Apollo van het Vijverhof (by Welt Hit II x Ritmeister) Devroe was certainly the hot favourite for the title and he experienced little difficulties in getting the highest scores from the jugdes in the first two rounds. For his Grand Prix he got 69,894% and for the Special he received 70,104% winning both rounds. In the freestyle finals Devroe had to ride in a massive downpour of rain but that didn't shake him much despite a rein slipping from his hand. With one mistake and a 73,375 kur score, Devroe brought his total to 213,373 and earned the gold medal.

Devroe had the 25-year old Julie de Deken breathing down his neck the entire Championships. With a minimal point difference the 2010 Belgian Talent of the Year finished second in all three rounds and got the silver. Aboard her Westfalian gelding Fazzino (by Florestan x Rivellino xx) De Deken experienced a tough kick off at the beginning of the 2011 outdoor show season and was not on the same wavelength with her horse. This resulted in not being nominated for the Belgian team for the 2011 European Championships. The young Belgian, however, did take revenge at the nationals by outclassing two other selected team members. Trained by Tineke Bartels, Julie was in charge of her horse and actively rode to high scores: 68,702% in the Grand Prix, 69,354% in the Special and 73,025% in the kur to music (total of 211,081 points). 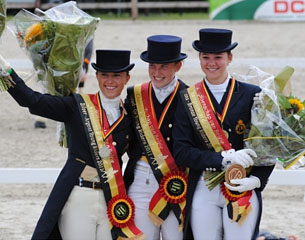 German based Johan Zangers saddled his show jumping bred Question de Liberté, a chunky Danish warmblood gelding by Quidam de Revel x Lagano. In the Grand Prix, Zagers was fifth with 65,872%, improved slightly in the Special (66,021%, 4th) and climbed to a third spot in the kur with a 69,450% score. His total of 201,343 was 0.599 points more than fourth placed Claudia Fassaert on Donnerfee (by De Niro x Rosenkavalier).

De Deken was invincible in the small tour championship with her Holsteiner licensed stallion Lucky Dance (by Lucky Lionell x Placido Sun). She won all three rounds with strong seventy percentage scores and left Philippe Jorissen on Agneta (by Abanos) almost four percent behind her. Former young rider Brecht D'hoore made a successful transition to the senior riders group and got bronze with Sital (by Metall). 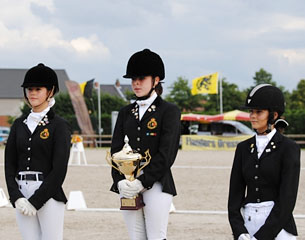 In the youth divisions three new champions were crowned: Charlotte Defalque and Epiascer won all three pony classes and earned the national pony title. Julie van Olst had to fight out a tough duel with Jorinde Verwimp but Van Olst persevered and got gold. Tahnee Waelkens and Saidja Brison challenged each other for the gold in the Young Riders category and Waelkens, who won a special equitation prize for her seat and aids at the European YR Championships, won gold.

Full scores can be viewed here