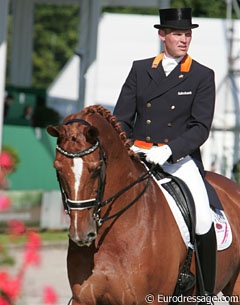 The Dutch Equestrian Federation and chef d'equipe/team trainer Sjef Janssen announced the team that will represent The Netherlands on home turf at the 2011 European Dressage Championships in Rotterdam, 17 - 21 August 2011.

The Dutch top three became clear after the 2011 CDIO Aachen but the fourth place was undecided and many B-team riders were asked to compete in the final Dutch selection trial held at the 2011 CDI Hickstead last weekend. It was Sander Marijnisen with Moedwil who obtained the highest Grand Prix score of 69.979% of all Dutch riders in the running for a team spot.

Dutch Aachen team member Marlies van Baalen with her bay mare Phoebe scored 67.809% in the Grand Prix, while Leida Collins-Strijk and On Top finished right behind Marijnissen with 69.234%.

Van Baalen and Phoebe have been named team reserves.