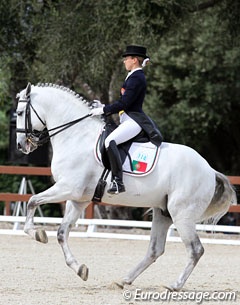 Considering some news found in national and international sites and magazines about the selection criteria of the Dressage Portuguese Team for the next European Championship, the national selector,

the president of the Dressage technical committee and the director of the Dressage Portuguese Association, decided to clarify the issue of the selection criteria for the formation of national teams.

By the time when the criteria were determined, the participant riders in ‘Big Tour’ were the following: Carlos Pinto with Poderoso do Retiro; Daniel Pinto with Ostil and Ta?lio; Filipe Canelas Pinto with Ulisses; Gonc?alo Carvalho with Rubi; Jannete Jenny with Spartacus and Ufano; Lui?s Pri?ncipe with Washington; Mafalda Galiza Mendes with D’Artagan; Manuel Veiga with Vara?o da Broa and Quinteiro da Broa, Maria Amaral with DJ; Maria Caetano with Xiripiti, Miguel Rala?o with Regalo; Nuno Palma with Sal, Pedro Torres with Oxidado, Raquel Falca?o with Real.

After the publication of these rules, no disagreement or any other kind of suggestions about this process have been known.

Since some Portuguese riders possible to be selected are living in England, France and Germany, the International Dressage Competition in Pompadour was chosen for being situated in the most available geographic location for all of them.

After the deadline to enroll this competition in Pompadour, five riders confirmed their application: Carlos Pinto with Poderoso do Retiro, Daniel Pinto with Ta?lio, Gonc?alo Carvalho with Rubi; Lui?s Pri?ncipe with Washington and Maria Caetano with Xiripiti.

As the horse Ta?lio died and owing to a lesion of the horse Poderoso do Retiro, the riders Daniel Pinto and Carlos Pinto could not participate in this competition.

So, the Portuguese Team will be formed by: Gonc?alo Carvalho with Rubi, Lui?s Pri?ncipe with Washington and Maria Caetano with Xiripiti.

In short, in fifteen riders competing now in the ‘Big Tour’, only five confirmed their enrolment in the Pompadour competition, the last selective degree, and only three of them get the whole requests.

We hope to clarify this matter on behalf of Portugal and the Portuguese Dressage.