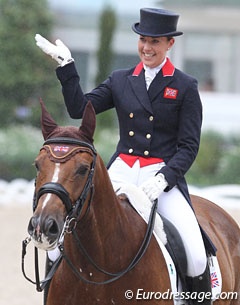 British Dressage has announced their selection of three horses and riders that will represent Britain at the dressage  European Championships in Rotterdam, the Netherlands (18 - 21 2011).

Both Carl and Charlotte with have Charlotte’s Fernandez as a direct reserve. It is anticipated that the fourth team member will be announced on Sunday 31 July.

Nick Burton, British Dressage Chairman of Selectors commented; “It’s great to see Laura and ‘Alf’ (Mistral Hojris) have continued in fantastic form since winning three silver medals in Lexington. Carl Hester has a sensational new star in Uthopia and with Charlotte and Valgero making their British Team debut, these are exciting times for British Dressage.”

All three riders are on the World Class Programme, which is generously supported by Lottery and Exchequer funding via UK Sport. The Programme incorporates both the Development and Performance Programmes and the Equine Pathway, and works closely with the three BEF Olympic Member Bodies, British Dressage, British Eventing and British Showjumping.

Commenting on their selection, the riders said:

Laura Bechtolsheimer: “This is an exciting team to be a part of as there’s so much potential. The Europeans are the key task but we’ll grow as a team and start to make our mark in preparation for next year.”

Charlotte Dujardin: “I’m over the moon – I just couldn’t believe it when I got the call! Valegro and I are still quite new to it all and have only been at Grand Prix level for six months so I’m very proud of us both. The best of it all is I’m on my first team with Carl (Hester) who I owe so much to.”

Carl Hester: “It’s always good to be selected for a British team but to be a part of one with such talent and possibilities is even better! To have Valegro on the team too is just the icing on the cake. It will be Uthopia’s first team appearance and I’ve had him since he was four, so to see him fulfil my and owner Sasha’s dreams is really exciting.”

All four riders will compete in the Grand Prix team test for the European Championship with the best three scores to count; the winner will be the team with the highest combined percentage. The top 30 riders then progress to the Grand Prix Special where individual medals can be won based on the highest average percentage score. The best 15 riders (a maximum of 3 from any one nation) then go forward to the Grand Prix Freestyle where individual medals will be awarded for the top three highest scoring riders.