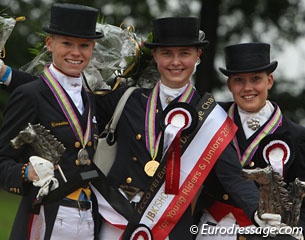 Sanneke Rothenberger and her 10--year old Oldenburg gelding Deveraux OLD (by De Niro x Rohdiamant) rolled on to their third gold medal of the week at the 2011 European Young Riders Championships in Broholm, Denmark, on Sunday 24 July 2011.

The European Championships suffered from torrential downpours for three days in a row, turning the gorgeous castle park into a mudfest. The footing upheld well but on Sunday afternoon it caved in to the rain and turned into a shallow pond.

The condition of the ground affected the rides of several horses which jumped the puddles or slid slightly. No footing can deal with such an amount of rain and on Sunday it was probably the worst day of all.

On Saturday Rothenberger had said that her horse is "weather proof" and Deveraux really lived up to those words in the Kur to Music finals on Sunday. The horse excelled as usual in his strongest gait, the trot. Big flying changes and flowing half passes ridden as a zig zag. The extended walk was nicely relaxed though the overstep could have been bigger. In canter the horse could canter more over the back as he gets a bit fixed in the frame but he still showed good half pirouettes. The choreography was neat. Straight tempi changes on the centerline following by extended canter on the track. The first change of the 4 tempi's was a bit crooked and there was a mistake in the 3 tempi's. The rest of the ride looked like auto-pilot and her custom-made music by Cees Slings fitted like a glove, which Rothenberger stand out not only on technical level but also on artisticity. 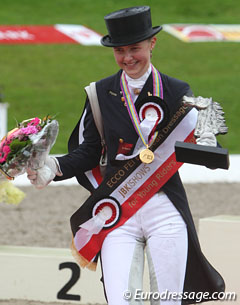 Rothenberger scored 76.075% and won her third gold medal as a young rider. Sanneke is one of the, if not, most successful youth rider in the world with gold stacked one on top of the other through the levels from ponies to young riders.

As Rothenberger moved up to Young Riders quicker than normal, the question was asked if she's going to make the step to Under 25 already next year as she has two Grand Prix horses waiting for her at home (Wolke Sieben, Van the Man).  "I just hope all my horses stay fit. I will try to teach Deveraux the Grand Prix. He already does the piaffe well but the rest not yet," she said.

The 1992 born Rothenberger has just finished high school and is going to college this year. "My dad said that riding is a nice hobby, so I'll start university in the winter. I could have gone to Cambridge but didn't have enough points, so I'll probably study business and economics in Wiesbaden."

German Annabel Frenzen gradually built up her stride at the European Championships and had her best test on Sunday, when she pushed her muscled Holsteiner Cristobal (by Coriander x Caribo) into fifth gear and finally got the level of expression needed to score the high marks. 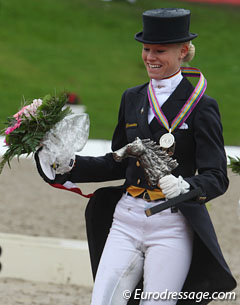 The powerful Cristobal was ridden quite conservatively in the team and individual test but in the kur the music brought the horse into the beat and the dark bay was bouncing on the wet footing, engaged and well carried. The trot work was excellent with wonderful traversal movements and ground covering extensions. In canter the bay sat well in the pirouettes and executed big four tempi's and three tempi's on the half circle.  Frenzen had a nice element in her choreography: half pirouette, changes on the half circle and another half pirouette.  There was a mistake in the three's but Annabel finished her ride with a super end halt.

Frenzen, who also moved up the levels from ponies, scored 75.075% to finish in silver medal position. Unfortunately she did not show up for the press conference, which was held in the VIP tent because of Princess Haya's (FEI President) attendance at the show for a few hours on Sunday.

Danish Cathrine Dufour capped off her 2011 European Championships with a third medal. After team and individual test silver, the sympathic Dane won Kur bronze as well. 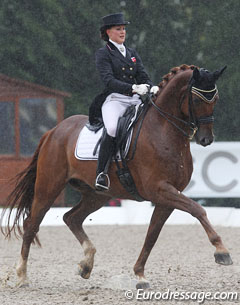 Aboard her green Atterupgaards Cassidy (by Caprimond x Donnerhall) she rode a fun and frisky freestyle infused with some Elvis (Return to Sender). The trot work was fluent and rhythmical. The three and four tempi's were done on curved lines to up the degree of technical difficulty. The extended walk was ground covering but the nose could have been a bit more out. Cathrine's harmonious ride was slightly disrupted by a brake before the right pirouette and an abrupt end halt.

After the award ceremony, Dufour was still on cloud nine as she had not expected to be so successful in Broholm. "it's amazing. Two weeks ago Cassidy wasn't in the place where I wanted him to be. I'm surprised he did so well," she explained. "Maybe next year I can beat Sanneke. Yesterday I wasn't so far away, today she was perfect.

At the press conference Hanni Toosbuy Kasprzak's shoe company ECCO was praised for its  support as title sponsor of the European Junior and Young Riders Championships as well as for supporting a special youth program in Denmark.

Ulf Helgstrand, president of the Danish equestrian federation, thanked Kasprzak for her support. "We are proud as Danes to have co-operated with Ecco in our development of programs for the young people. i had expected a result sooner or later, but we have already reached so much for a small country as Denmark. Hanni is not just a sponsor, she follows the sport," Helgstrand stated. 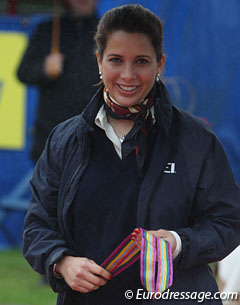 Princess Haya added that "the level of passion and commitment for the sport doesn't change with age. It's a pleasure to see that harvested by a federation such as the Danish one."

Judge Leif Tornblad stated that he was impressed by the quality of riding at this event. "The top has become far better than 25 years ago. Horses are born to be outdoor, but so are these girls too apparently. The quality is very high. We judges have to be really sharp to select who is the winner."

Judge Evi Eisenhardt concurred. "The spirit of dressage was here too. We as judges look forward to seeing the riders. I just came from Aachen and  maybe we'll see them there in the future."

Show organizer Bo Kristoffersen  kept the sunny side up despite the weather but was honest in stating that the rain spoilt the party. "The weather kept the spectators away," he said. "It could have been a big party but that was changed. Fortunately the ground held to the last day. If the ground doesn't work, we would have had no chance."

Back to the 2011 European JR YR Championship index