Arriving at Broholm for the 2011 European Junior/Young Riders Championships 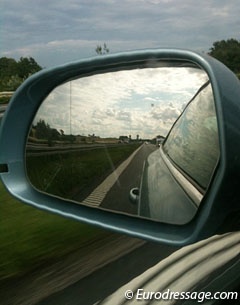 In July and August it always gets tremendously busy, one major show or championships following after another. With the CDIO Aachen barely being over and thoughts and impressions from the competition hardly processed, this reporter had one day at home on Monday to pump out the essential stories on the biggest Grand Prix show of the year before driving to the 2011 European Junior and Young Riders Championships at Broholm Castle in Gudme, Denmark.

I promised myself I would take my time and not stress about the 800 kilometer drive to the Kingdom of Denmark. I slept late (9 AM) and got woken by an internet technician turning up our driveway to install Fibernet. I had forgot about that, so I had to jump out of bed to meet the guy at the front door. While he was installing the new modem and fixing the settings, I took a shower, fed the horses, chickens, pig and dogs and then packed my suitcase. What's so handy about going to a show by car instead of airplane is that you can use your entire car as suitcase. I threw in jackets, boots, pumps, flip-flops, suitcases, camera bags, computer, lenses. My entire trunk was filled to the brim…and that for just a seven-day trip.

I left my house at 11 AM and my navigation system said it would take me about 8 hours to get there. I know I can always drive quite some time off that estimation and calculated it would actually be a 7 hour trip. I waited for rush hour to be over and I had the best drive imaginable. No jams despite extremely annoying roadworks between Bremen and Hamburg (how long will they take to finish that job??!!)

It was a magical moment to drive into Denmark. The colours of the tarmac on the motorway changed to a dark tone and the vast emptiness you meet after Flensburg is impressive. There are so few houses close to the motorway in Denmark and one just crosses fields planted with oats stretching all the way to the horizon. I always listen to the British Military radio station BFBS while driving through Germany, but in Denmark I switched to "Guld" and it was funny to hear the commercial in Danish and trying to figure out what they are about. When I got to the island of Fyn, I drove over a huge bridge which seemed to take me all the way up into the sky. It was like being on a Six Flags roller coaster ride, but then in your own car. The view from the bridge was absolutely breath taking. Small villages in the bays, boats on the water and thick clouds in an endless sky. 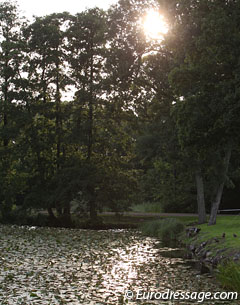 Before checking into the hotel I wanted to explore the show grounds and maybe pick up my credentials. Broholm castle is located in the tiny town of Gudme but the venue was not registered in my GPS system and I had forgot to look up the address. I took my chances and drove into the town looking for the place. Within minutes I was in the middle of a field on a dirt road which was marked as genuine street on my GPS. I turned round and followed the road from Hesselager to Lundeborg..and there it was. I saw the flags of the European countries waving in the wind in between trees and then a beautiful mote on the opposite side.

I parked my car on the wobbly cobblestone castle courtyard and then crossed the street to the show ring where the opening ceremony had just finished and a reception was being held outdoor with wine and nibbles. It was funny to come across exactly the same people with whom you spent a week in Aachen just two days ago: Christoph Koschel, Jeroen Devroe, Fanny Verliefden, were now there as trainers instead of Grand Prix riders. Judges Mariette Withages and Susie Hoevenaars were also spotted amongst the crowds.

I had dinner in the castle in joyful company of some Brits, Germans and South Africans before I headed to the hotel, which was just down the road 5 kilometers from the venue. The hotel owner was quite displeased that I arrived so late (22.30h) without having notified him but I was all smiles and apologized for my rudeness. I got a small but cosy room with a television that has poor screen quality but featured films in English (whoohoo). Unfortunately the promised wireless connection didn't work at all and the network timed out constantly. This will make my job harder this week.

The first part of the team championship test starts at 8 AM in the morning so it'll be an early wakeup call.