Third Victory for Rath and Totilas at the 2011 CDIO Aachen 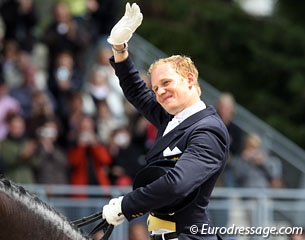 “I am delighted that I was able to win here three times in a sold-out stadium,“ said Matthias Alexander Rath overjoyed after his ride on Totilas in the Grand Prix Freestyle CDIO at the 2011 CDIO Aachen on Sunday 17 July 2011. “Now we can return home with a great feeling and train for three or four weeks in a tranquil and fully concentrated atmosphere.”

Totilas and Matthias Alexander Rath scored 82.825 percent and managed to narrowly take the lead. Mistakes in the flying-changes in the freestyle routine that was choreographed especially for Totilas and which was instrumentalised by the DJ and producer, Paul van Dyk, cost him points.

If it had been down to the crowd the American rider Steffen Peters would have been the winner. The rider, who won the Grand Prix of Aachen in 2009, was awarded a score of 82.00 percent for his performance on the 13-year-old KWPN gelding, Ravel.

“It is a dream come true to finish so close behind Totilas. This was an amazing show for me here, the crowd was really behind me and Ravel, it was a fantastic experience and the perfect conclusion of a wonderful time in Aachen. Ravel performed a super freestyle here, he spooked a bit because of the cameras, but otherwise everything went extremely well,” reported Peters, who runs a dressage yard in San Diego, California. 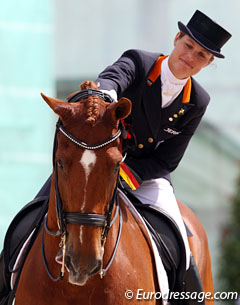 The Dutch dressage star Adelinde Cornelissen finished third with her World Cup winner Parzival (81.775 percent). The pair, who made a few mistakes – the chestnut horse fell into canter twice in the half-passes in trot – had included some very difficult movements into her freestyle including a piaffe pirouette with a change of direction.

The British rider Laura Bechtolsheimer who ranked fourth with a score of 79.825 percent, had set her aims high.

“I put myself under enormous pressure, because I wanted to win here,” the 2010 World Championship silver medallist admitted. “But it was bound to happen sometime or other that things didn’t go as perfectly as I’d planned. It is a shame, but now I am just pleased it happened here so I can concentrate on myself again in future. I simply put myself under too much pressure,” said Bechtolsheimer, who made several mistakes including dropping into canter twice in the extensions in trot and a mistake in the transition into the flying-changes every stride.
Christoph Koschel (Hagen a.T.W.) finished fifth with Donnperignon. The pair were awarded a score of 79.7 percent for their almost flawless freestyle routine.

Isabell Werth, who rode the 10-year-old Ehrentusch son El Santo NRW was disappointed with her freestyle score. Her difficult freestyle routine to brand new David Bowie music – „Ernie“ made a mistake in the pirouette when he spooked – was awarded a score of 78.725 percent from the judges: Sixth place.

(We just got home and we're catching up on photos. Please bare with us as we try to write out exclusive Eurodressage reports as quickly as possible as well as process a couple of thousand photos).

Back to the 2011 CDIO Aachen Coverage