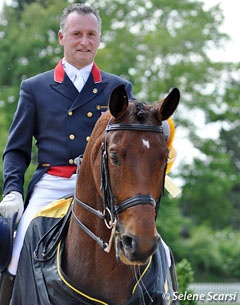 Following on from their victory at the recent Munich World Dressage Masters grand prix special test, Richard Davison and Hiscox Artemis will be first up for the Brits at next week’s Aachen FEI nations cup competition.

Davison and The Countess of Derby’s Florestan gelding left a strong impression with both judges and the German public at last months prestigious 5 star event and yet again showed they are capable of 70% plus scores.

In Amsterdam they scored more that 71% in the grand prix and topped 77% in the kur and will be hoping to hit that form in Aachen.

“Everyone loves riding at Aachen” said Davison. “ It’s the mecca of dressage as far as I am concerned and I have some good memories of top three team placings there over the years”.
It will be the first occasion where Hiscox Artemis will face the championship formula including all three tests and the Aachen spectators are sure to appreciate the music endorsed personally by Robbie Williams and global song writer Guy Chambers.

Together with Robbie Williams, Chambers wrote world wide hits such as Millenium, Rock DJ, Love Supreme and countless others. Not only do they all feature in Davison’s freestyle but Chambers personally played the piano parts to the Kur. With the expertise of Robbie William’s team and the Royal Liverpool Philharmonic Orchestra, the Joost Peters arrangement was always certain of being both beautiful and dynamic.

“To have a kur with so much musical genius behind it is almost surreal and I know I have to be the luckiest rider around and I am sure that everyone in Aachen will enjoy it too”, says British Team Captain Davison - known for his attention to detail, organisation and ability to multi task.

For example during last week’s Olympic Test Event in London, where Davison played a key role, his groom (former FEI groom of the year Jenny Ellis) travelled Hiscox Artemis the three hour journey to London and stabled him close to the Olympic venue allowing his training to continue while Davison performed his Olympic duties. “ Its really useful to train Artemis in different places and it was a great preparation for Aachen. He was great in training; light, forward and so enjoyable to ride that I had to be very strict and force myself to stop” enthused Davison.