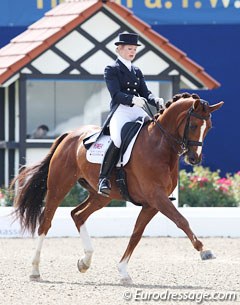 The British Junior and Young Rider Selection Committees announced their squads for this year’s European Championships in Broholm, Denmark, 20 – 24 July. Two all-girl teams have been selected after a final trial held at Hickstead last weekend.

The all-girl Junior Team is headed by Samantha Thurman-Baker who’s been in great form this spring. She has two horses listed with Spring Pascal getting the nod over Highcliffe Apollo. Emma Corbett makes her team debut with Somerford Premier League winner Furst Diamantino while Pippa Hutton, daughter of International trainer and rider Pammy, also earns her first British flag with Duela. Olivia Oakeley and Donna Summer make up the quartet and they’ll be hoping to use that experience learnt as part of last year’s team.

The Young Rider Selectors have elected to send two individuals to represent Great Britain. Chief Selector Judy Firmston-Williams commented “As Selectors, we are searching for the best talent who can perform on the international stage and be competitive in a Championship environment. Whilst we have seen some promising young rider combinations we feel they are not yet ready or on form at the right time for this year’s Championships. For this reason, we are sending only 2 individual combinations.”

Melissa Beer will travel to Denmark with her own Celestial King. The paring has been on three Junior teams but this will be their first Young Rider appearance. Sophie Wells is an experience International campaigner and with Jacqueline Walker’s Pinocchio, she claimed double individual gold at last year’s World Equestrian Games in the Para Equestrian Dressage for Grade IV riders.

There will be a compulsory pre-European Team Camp for squad members and reserves on 5 – 7 July at High Meadows in West Sussex by kind permission of Michelle Cogger.