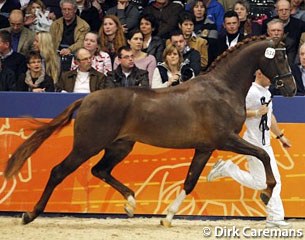 The 2011 KWPN reserve licensing champion Dude (by Vivaldi x Havidoff) has left the 2011 KWPN Spring Stallion Performance Testing in Stegeren, The Netherlands, and will return to finish the program in the autumn of 2011.

The 3-year old liver chestnut stallion became lame to his right front leg and was therefore not tested by the guest judge rider on Monday 9 May 2011. The stallion continued to be unlevel the next few days and this morning he was vet checked again.

In agreement with the stallion licensing committee, the stallion will be accepted for the autumn performance testing, so owner Bernd Tamerus picked up Dude and brought him home.

Next week Tuesday all dressage stallions in the performance testing will be tested again and the committee will give an oral review to of their current opinion on the colts to the owners.