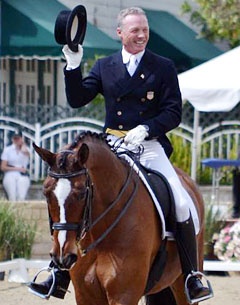 California's Jan Ebeling and Rafalca displayed not only their difficult Grand Prix freestyle routine during the final day of the Festival of the Horse CDI-W in Burbank, CA, but also their readiness for the 2011 World Cup Dressage Final in Leipzig later this month.  Earning a solid 73.025% and a ticket to the World Cup as one of two North American League representatives

"She's gotten so much stronger and better this year, and she's taken it to a whole new level," said Ebeling.  "She felt awesome!  She's finally come into her own now."

Debuting their Intermediaire I freestyle, Steffen Peters completed his sweep of the small tour with Jen Hlavacek's Weltino's Magic (by Weltino out of Diva by Diamond Boy) by scoring a huge score of 79.417%.

"The first word that comes to mind is 'fun'," said Peters.  " I rode the freestyle a bit conservatively today since it was the first time, but he was right on."

Meanwhile, Jamie Pestana rode her own Hanoverian gelding Winzalot (by Wokenstein II x Frazisco) to a freestyle victory with a score of 67.250% to close out the Young Rider division.