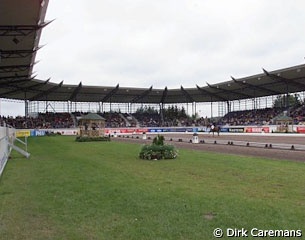 The organisers of the CHIO Aachen are considering the organisation of the 2015 European Equestrian Championships. They plan to present an innovative concept to the International Equestrian Federation (FEI).

“We feel obliged to constantly develop new ideas here in Aachen, this of course also includes the organisation of major championships”, stated Carl Meulenbergh, President of the Aachen-Laurensberger Rennverein (ALRV), to substantiate the current considerations. “With championships in five disciplines, all carried out at one venue, we want to advance the European Championships to European Equestrian Games, and to live up to the outstanding atmosphere that we had here during the World Equestrian Games in 2006”, said Michael Mronz, General Manager of the Aachener Reitturnier.

“We will now finalize this concept and present it to the FEI and the FN”, said Kemperman. Formally, the German Equestrian Federation (FN) has to make the bid for the European Championships with Aachen as the venue. In the spring of 2012 the FEI will decide about the allocation of the event.