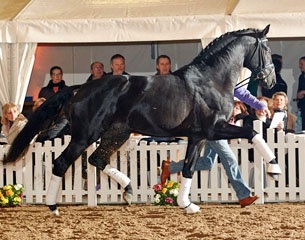 Inshallah de Muze has been proclaimed champion of the 2011 Belgian warmblood stallion licensing following the third and final phase of the approval at equestrian centre De Warre in Neeroeteren, Belgium, 17 - 19 March 2011.

Twelve young stallions in total received a green card for breeding for the BWP studbook and on the first day of the licensing two older stallions were accepted as well. The are the thoroughbred Esteban xx (by Prince Mab xx x Tumble Wind xx) and the Selle Français Ernest (by Jalisco B x Galoubet).

The third phase including an in-hand presentation as well as an under-saddle presentation by the stallions' steady riders as well as guest judge riders. The chestnut show jumper Inshallah de Muze (by Nabab de Reve x For Pleasure x Darco) stood out with his scope and potential and was proclaimed champion of the licensing. The proud breeder of this stallion is Bart Van Poucke. I’m Special de Muze (by Emerald van’t Ruytershof x Nabab de Reve x Chin Chin) was named reserve champion. He is bred by Joris De Brabander.

"In the dressage area we didn’t have a very good year," the BWP press officer admitted as only one of three presented stallions was approved. It concerns the Rhinelander branded Special Agent Amour (by San Amour x Polidiktus van de Helle x Feo). The black stallion is "a dressage horse with a lot of potential that can be a great catch for the studbook," according to the BWP. The colt is bred and owned by Belgian Grand Prix rider Philippe Jorissen.