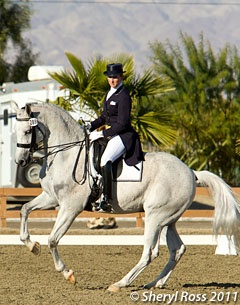 Riders who dream of competing at the Pan American Games will begin their quest at the Mid-Winter Dressage Fair CDI 1*/Y/J in Burbank, CA, February 24 - 27, 2011.  As the first official qualifying competition on the West Coast, horses and riders will compete in front of FEI judges Jayne Ayers ("I" USA), Natalie Lamping ("I" USA), and Lorraine MacDonald ("I" CAN).

Excitement is building among West Coast Pan Am hopefuls such as Marisa Festerling, David Blake, Rebecca Rigdon and Cyndi Jackson, as well as riders Amanda Harlan and Brandi Roenick who are moving up from junior/young rider ranks to vie for an invitation to the Pan Am Selection Trials.  In addition, a contingent of Canadian competitors will contribute to the international flavor of the competition.  All riders, including Festerling from Moorpark, CA, are ready to get started on the road to the Games.

"I feel like my horse 'Big Tyme' and I and are seasoned at this level and ready to go," says Festerling.  "It's a nice feeling to have the option to get scores early in the year, because you never know what can happen as the season goes on and time can get away from you."  Festerling and "Big Tyme" represented the United States at the 2006 FEI/WBFSH World Breeding Championships in Germany, and Festerling is hopeful that they will qualify for their first FEI-level U.S. team.  "To make it to the Pan Ams would mean the world to me and be such an honor and achievement.  It makes the everyday sacrifices worth it."

Another highlight of the competition will be the participation of Steffen Peters and "Ravel" in the national grand prix classes.  In their first outing since winning two individual bronze medals at the Alltech/FEI World Equestrian Games last fall, this pair will be utilizing this opportunity as a final preparation for the World Dressage Masters in Florida next month.  Peters will also compete with two horses in the small tour Pan Am qualifying classes.