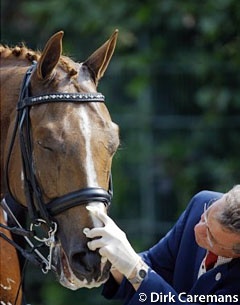 Between 16-18 May 2011 American Bitless Bridle activist Edward Allan Buck will be presenting arguments regarding enforcement of the health and welfare rules, regulations and Mission Statement of the United States Equestrian Federation predicated upon refusal

to allow bitless bridle competitors.  Buck is allowed to submit affidavits on behalf of supporting the grievance and relief sought.

While in The Netherlands the bitless bridle in competition has been tested and is so far allowed in special classes from training to first/second level,  in the United States it is not so. The Dutch Equestrian Federation is the second in the world to allow bitless bridles at shows. South Africa is the first.

Buck believes there is a paradoxical non-compliance of the USEF rules and objectives. He uses the USEF Vision Statement as stepping stone for his argument:

Buck recites the object and general principles of dressage as formulated by USEF:

The principle relief that Buck seeks is  "for all competition horses and athletes" to have "the right to compete in any equine venue under the auspices of USEF in the bitless format, which means any form of bitless bridle, including but not limited to, cross under the jaw rein bridles, side pull bridles, hackamores, and mechanical hackamores. The relief sought does not include the use of a halter in competition. The relief being sought is for the institution of the bitless bridle authorization, to go in effect immediately and not to be delayed for any period of time."

If any one wishes to support our horses and would so choose to submit such an affidavit [include full name, address] please email me the
affidavit in PDF format to spiritbridle@yahoo.com