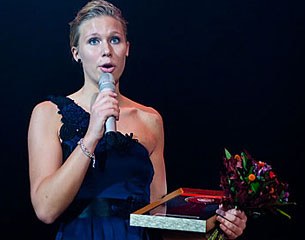 Patrik Kittel was proclaimed Swedish Dressage Rider of the Year following his great successes at the 2010 World Cup Finals in 's Hertogenbosch and his team nomination for the 2010 World Equestrian Games.

"Pride will have a fall," Kittel quipped.

Minna Telde was awarded with a trophy for "Best Performance of the Year" for taking her inexperienced Grand Prix horse Larina Hom to the 2010 World Equestrian Games.

Nina Hofmann received the award for "Future Star in Dressage". This trophy, which can only be won once, is given to riders below the age of 30 who compete at the highest level and have international experience.

"First I would like to thank my horse Leo. Together we've gone from medium dressage upwards. I also want to thank my first coach Pia Holgersson and my dear dad who drove me around Europe," said Nina with tears in her eyes.

Dressage rider Jeanna Hogberg did not end up with one of the most important prizes of the evening, Comet of the Year. The award went to the 22-year old eventing rider Sandra Gustafsson, who has been successfully competing in national 3-star evening shows.