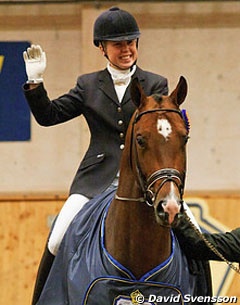 Sohn der Sonne, Bellagio, Isac and Jimmie Choo became the winners of the 2010 Swedish Young Horse Championships for 3 to 6-year old dressage horses at the State Stud in Flyinge, Sweden, 22 - 24 October 2010. Sweden's young dressage stars gathered in Flyinge for six strenuous days of competition in the running for the national title as well as glory and fame.

In the 3-year old division Jessica Andersson and the liver chestnut beauty Sohn der Sonne became the national champion. The long legged Oldenburg stallion (by Sir Donnerhall x Sion x Pik Bube I) performed excellently in the first round but was quite tense in the finals. Nevertheless this stallion, which sold for 100,000 euro to the Andersson family at the 2010 Vechta Spring Elite Auction, totalled the highest points and beat Anna Svanberg on Don Love (by Don Romantic x Chapman)) and Susanne Gielen on the Flyinge bred Yoshi (by Fidertanz x Show star) 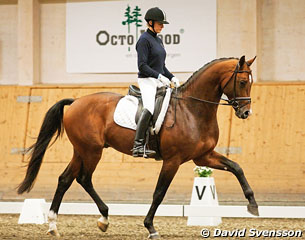 Last year's 3-year old champion Bellagio, a KWPN bred United x Estaban offspring, renewed his title in the 4-year old division. Jan Brink's in-house rider Yvonne Osterholm sat firmly in the driver's seat and steered the bay stallion to victory with extremely high scores. 83.000 points in the first round (2nd place) and a gigantic win in the second round with 97.750 (!!) points left no doubt who the winner was.

Guest judge riders were Germans Hella Kuntz and Manuel Bammel. The high percent score goes back to the fact that the maximum points given are 4x10, two scores from each test rider, as well as scores for rideability and general impression. Hella gave the scores 9,5 / 9,8 and Manuel went even higher – 9,8 / 10 adding the comment that "riiding Bellagio is better than sex."

Minna Telde and the 4-year old Oldenburg bred Stickup (by Stedinger x Dormello) were the reserve champions with an average of 92.500 points. The bay is bred by Dieter Schmidt and owned by Wenche Håkansson. 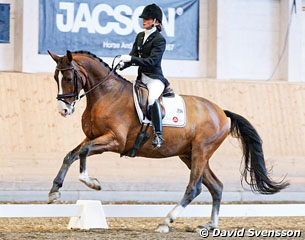 With her Swedish warmblood gelding Isac (by Hip Hop x Master) Telde climbed on the highest step of the podium and won the title in the 5-year old division. Last year's Swedish championships caused much commotion as Isac bit his lip at the event but was not eliminated despite complaints from spectators. Telde put in a nice ride which showed her professionalism but which lacked sparkle. The horse reared once and tried to turn around but Telde had him quickly back on track. The judges commented that ”these things can happen with a young horse but as he was back within seconds and he performed the program without any more visible tension we just went down on suppleness to 8,8." The ride in the qualifier and final was a record for the Swedish Young Horse Championships. Never before has a 5 or 6-year old reached 90 % or above.

After the ride Telde stated her horse spooked from the blue table cloth on the judges' table because her horse was already tense due to a loose horse in the warm up. However that same cloth was also there at the training sessions during which riders could get their horses acquainted with the ring and surroundings. Jan Brink and the Swedish warmblood Santiago (by Saigon x Flemmingh) were the runners up. 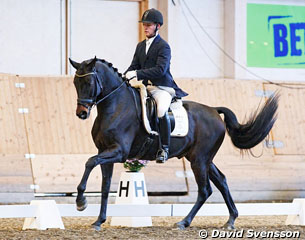 Swedish Grand Prix rider Mads Hendeliowitz and his gelding Jimmie Choo SEQ (by Sandro Hit x Don Schufro) were the grand champions in the 6-year old categories. Claiming the trophy in the first round with 87.600 and the finals (87.800), Hendeliowitz referred Flyinge head trainer Susanne Gielen to the second place. Gielen saddled the Flyinge state stud owned chestnut stallion Belamour (by Belissimo x Lord Sinclair) and scored 85.600 in the finals.

Swedish photographer David Svensson reported that the judging at the 2010 Swedish Young Horse Championships was in general quite good but "in some of the classes there were horses who got into the arena with a slightly distorted gait and then finished the ride and left the arena with a limp. Not a single horse was dismissed during the ride. The judges called this "some tension" and praised the nice regular gaits afterwards in their commentary," Svensson complained. "That aside I think the judges did a very good job this year, they got
the right horses into the finals and they let the right horse win each class, in my humble opinion."