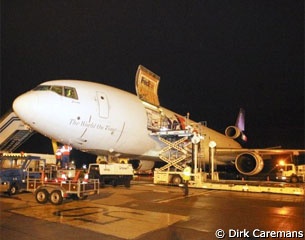 Eurodressage in-house photographer Dirk Caremans was present at the Liege airport in Belgium, when the first shipload of horses was being boarded on the plane for the flight to the U.S.A. for the 2010 World Equestrian Games in Lexington, Kentucky.

The first horses included the Dutch, German, and Spanish dressage horses as well as a few endurance and reining horses and Australian team horse Victory Salute, who was based in The Netherlands for training.

Take a look at the selection of photos Dirk Caremans has made available in the image gallery below. Dirk will be covering ALL disciplines at the 2010 World Equestrian Games and is one of the best equestrian photographers in the world!

Check out his super database which contains over one million photos: www.caremans.be