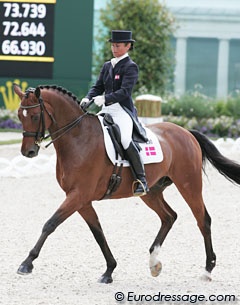 The Danish Equestrian Federation announced the team that will represent Denmark at the 2010 World Equestrian Games in Lexington, U.S.A., which take place the last week of September at the Kentucky Horse Park.

Based on the performances of the Danish combinations throughout the season, as well as at the final observation event at the CDI Copenhagen, Danish team trainer Rudolf Zeilinger appointed the following riders as team members:

"This is a strong team we send to the U.S.," said team trainer Rudolf Zeilinger. "These five riders have achieved good results the past season and I'm convinced they will produce strong rides at the World Championship. The aim to finish in the top five."

A new comer to the Danish team is Anne Troensegaard on Seduc. "It's crazy and a bit surreal," said an ecstatic Anne. "We have worked for many years to reach this point. Seduc has never been better and I can see now that it's all worth it. It's a dream that comes true. I'm just so happy."