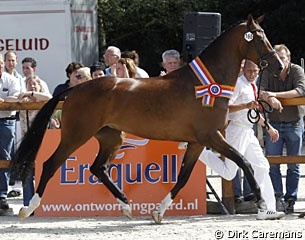 Crisjena has won the 2010 KWPN Mare Championship held at the 2010 KWPN Paardendagen in Ermelo, The Netherlands, on 20 August 2010. Bred by Jan de Bruijn and owned by Ad Valk, this mare is by Vivaldi out of Odjena (by Cabochon).

Nine mares from three groups were invited to the Champion's Ring and according to judge Arie Hamoen, Crisjena was the best mover of all. The bay mare was praised for her textbook conformation and gaits.

Cabola, by Vivaldi out of keur mare and 2000 KWPN mare champion Pabola (Ferro x Darwin), finished in reserve champion's position. The mare is owned by Ad Valk as well and is bred by one of Holland's most famous breeders, A.A. van der Koppel, who also bred Ad Valk's licensed stallion Apache.

The top five was completed by Chi (by Uphill x Cabochon), Callisto MH (by United x Casanova) and Cidamorka (by Jazz x Zuidhorn).