Double Gold for Isabell Werth at the 2010 German Dressage Championships 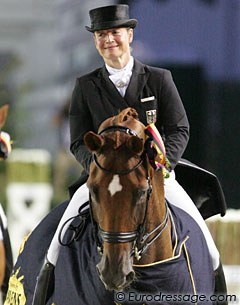 Scoring 77,708% in the Special and 81,700% in the Kur Werth kept all competition at bay and affirmed her status as Germany's best dressage rider. The weekend was filled with success for the Rheinberg based Isabell as she also won the 2010 Medien Cup Finals with her rising Grand prix star El Santo NRW.

Kur title defender Matthias Alexander Rath had to settle for silver in the freestyle. Aboard Ann Kathrin Linesenhoff's 15-year old Oldenburg gelding Sterntaler UNICEF (by Sion x Manstein) he scored 79,150% for his Lawrence of Arabia-inspired "1001 Nights" freestyle. Christoph Koschel and 11-year old Finnish warmblood Donnperignon (by Donnerhall x Matador II) clinched the bronze with 78,150%. The winners of the Grand Prix, Anabel Balkenhol and Dablino, premiered their freestyle in Munster and slotted in sixth with 75,950%.

"I'm especially happy with the Special and the Kur," Isabell Werth explained. "In the Grand Prix we still had our little issues (spooky). I will travel home a happy woman."  Matthias Rath was pleased with silver. "I clearly won silver and did not lose gold. You can only 'win' medals if you are riding against Isabell Werth, you can't lose them." Christoph Koschel had his ups and downs in the championships but ended up with bronze today. "After we had some problems with the covers on the tv-camera in the Grand Prix, I couldn't seem to get the right level of focus, neither for my horse, nor for myself. Maybe we don't feel at home here in the arena in Munster."